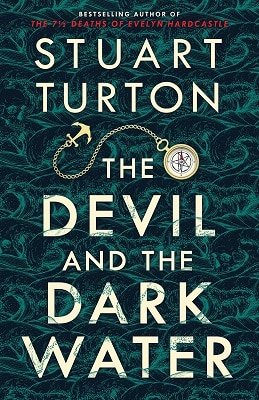 The Devil and the Dark Water is my kind of novel.

And with it, Stuart Turton has hit the ball clear out of the park, inarguably proving to the literary world that a one-hit wonder, he is not.  As a follow-up to his bestselling 2018 debut, The 7 ½ Deaths of Evelyn Hardcastle, his sophomore effort is an absolute stunner.

I will even venture to say it’s novelistic perfection.

The year is 1634. Samuel Pipps, the world’s greatest detective, is imprisoned on a ship bound for Amsterdam, where he will be tried and executed for an unknown crime upon his arrival. Also on the ship is Arent Hayes, Sammy’s friend and personal bodyguard, and Sara Wessel, a high-ranking noblewoman with a secret plan of her own.

Shortly after departure, the ship is plagued with strange events of a demonic nature – a sail is marked with a malevolent symbol, a dead leper haunts the passageways, and livestock are slaughtered. And the passengers hear the whisper of an evil voice in the night, tempting them with their innermost desires and foretelling three unholy miracles that will bring nothing but death and destruction.

With Sammy locked away in a cell, it is up to Arent and Sara to investigate the mystery of the demon — and stop it in its tracks before the ship and all its passengers are doomed.

Hmm. How shall I begin? I am at a loss as to where I should best start this review because there is just so much to admire about The Devil and the Dark Water. I am uncertain as to whether I will effectively convey the full extent of its intelligence and beauty.

In short, the novel is a paranormal Sherlock Holmes and Agatha Christie mash-up. We have the ingenious Sherlockian detective duo of Sammy and Arent, and also a large cast of nefarious characters, similar to what is often seen in Christie’s novels. We have the dryly sarcastic humor and scientific logic of Holmes, as well as Christie’s trademark red herrings and elements of the more intuitive detective work of her infamous Hercule Poirot.

And we have the exceptional writing skills of Stuart Turton to tie it all together.

The mystery that Turton has crafted is smart and extensively complex. It has numerous moving pieces and parts, and as I mentioned above, there are many players involved with contradictory motives. In the hands of a lesser writer, such a long list of characters would result in readers’ minds being messily boggled. But Turton does an amazing job of gradually adding the characters into the narrative, one by one, and giving each individual a distinctly memorable personality. Character confusion is really very minimal. (Plus, there’s a handy dandy Passenger and Crew Manifest in the front of the novel to aid the reader if names become jumbled.)

Turton also never overwhelms the reader with the intricacy of the plot. His writing has a skillful ease to it and is lovely to read. Ever so gently, he carries the reader along as he slowly reveals the interconnectedness of the mystery’s pieces, leaving not even a ghost of a plot hole. And for fun, he throws in plenty of what I call “mini twists” – small, unexpected surprises that work well to maintain a high level of engagement and interest in the story.

But even with Turton’s methodical unfurling of the novel’s layers, the core mystery of The Devil and the Dark Water is virtually unsolvable. Believe me — from my armchair, I tried. I tried hard. And while I did manage to snap into place one extremely important aspect of the plot, I had to eventually accept the fact that I would come no closer to the solution.

And never could I have imagined the freedom the insolvability would hand to me. I could relax, quiet my mind, and simply enjoy the novel, straight through to its grand and satisfying conclusion.

Hands down, The Devil and the Dark Water is one of the finest mysteries I have read in years. It’s clever and fun. Addictively page-turning. And so very, very entertaining.

What a dreadful mistake it would be to miss it.