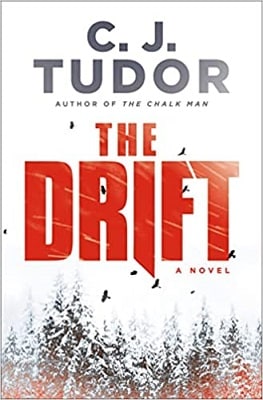 Having read a number of novels by C.J. Tudor, I gladly accepted this ARC. The dust jacket blurb intrigued me, pulling three stories together into a single novel, forcing the reader to tug at threads to put together an impactful story that is full of chills and thrills. Tudor focuses on the darker side in her narrative, but is able to entertain the reader with ease, keeping them flipping pages as the plot thickens.

Waking up to significant chaos, Hannah finds herself surrounded by blood and glass. The bus on which she was travelling crashed during a snowstorm while leaving her secluded boarding school. She’s trapped inside with a few survivors, an unknown virus, and no way to reach out for help. Deciphering that they will have to work together or face the reality of perishing with the others, Hannah rallies the troops, while trying to keep the secret The Retreat has from the outside world.

In the same snowstorm, Meg awakens, dangling in a cable car. As a former detective, her instincts are strong and Meg is sure something is off. With a number of strangers around her and one dead body in the cable car, Meg is unsure what’s going on. All she can remember is that she was on her way to The Retreat. Noticing a familiar face amongst the strangers, Meg begins piecing it all together, and it’s anything but good news.

Carter is safe from the blizzard in an abandoned chalet, spending time with his friends. They are working on a life-changing vaccine and trying to stay alive long enough to ship it out. With the power going out intermittently and the generator on the fritz, nothing seems certain. A shadowy appearance in the depths of the chalet could mean something nefarious awaits anyone who strays too far from the group. When all sources of power fizzle out, only the strongest will survive, but is Carter one of them?

All three of these storylines come together in unexpected ways to create the larger narrative that is this novel, where working together becomes essential and may be the only way for the truth to come out. A chilling piece by a master of the genre, C.J. Tudor shakes the reader to their core with this novel, sure to be the talk of the winter season!

I have come to expect a great deal from C.J. Tudor, though I am never sure what awaits me when I start one of her books. The ideas are unique and the approaches even more so. Tudor offers readers some crumbs and then leads them on quite the adventure, where the end result is anything but clear.

C.J. Tudor has a wonderful way of building up the narrative with plenty of detail and intense description. The story comes to life, though the reader remains slightly confused as the story opens on three independent fronts. As things progress, there are small bits that connect each storyline, with key characters in each setting making themselves known. By then the plot as been developing and keeping the reader guessing, which serves to bind all three narratives together. The momentum is unstoppable by this point, as is the falling snow, which adds an eerie sense to it as well, keeping the reader completely at Tudor’s whim. While I struggled with parts of the development, I can see what Tudor was hoping to offer readers as the story’s perspective became clear.

Kudos, Madam Tudor, for another unique success. Keep them coming!

The Drift is available at:
Amazon