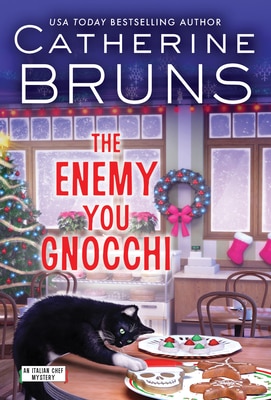 The Enemy You Gnocchi

Have you only got time for one Christmas book this holiday season? I’ve got the one for you. It’s a beautiful rectangle that holds a Christmas story, wrapped up in a romance, and tied together with a big bow of a mystery.

Whether you are a dyed in the wool mystery buff; just looking for a Christmas story complete with small town festivities and friendly people; or want a romance with all the hope that a new relationship can bring; this one has it all.

It’s the third book in the Italian Chef series by Catherine Bruns, but don’t let that stop you even if you haven’t read either of the first two. The mystery is complete within the book, and comes with some unique twists, a few false leads and red herrings, and an interesting denouement. Even if you solve it ahead of time, you’ll enjoy reading about how Tessa, the central character, works out the solution. There are secondary characters who are on-going, but Bruns does a good job of providing information on how they relate to Tessa, so there’s no confusion as to where they belong in the world of the story. As for the romance, that, too, is a relationship that has been growing since the first book; but the relationship as it exists in this book is clear enough to enjoy as it grows toward the promise of a resolution.

The book opens with preparations for the town holiday festival, with everyone focused on making it a success as the money is slated for the local humane society. Everyone, that is, except Mario, the new man in town who seems to be focused on making enemies of everyone except Tessa. In her case, he seems bent on making himself an unwanted suitor.

There is something suspicious about Mario, though, and Tessa wants nothing to do with him. He has opened a coffee shop in direct competition with one of Tessa’s close friends and through a series of shady business practices is proceeding to put her friend out of business. He also comes by Tessa’s restaurant and makes unwelcome advances toward her. As she pushes him out the door, she sees him approached by two suspicious men in a black sedan. He tries to avoid them but is unsuccessful and they have what appears to be a threatening conversation. All this leads Tessa to a strong suspicion that he may have dealings with some less than honest people.

It’s almost a relief when Mario is killed, that is until suspicion falls on Tessa’s friend and Mario’s chief competition. Tessa is ordered by her detective cousin, Gino, not to investigate, but feels compelled to help her friend. As she begins her investigation, questions come fast and she totals up a lengthy list of suspects, most of whom are trusted members of the town, friends, or acquaintances of Tessa’s. Despite liking many of those on the suspect list, she continues to try to solve Mario’s murder all the while telling herself she is doing so in order to save her friend’s business.

That’s two of the three promised themes in the book, the mystery as I’ve explained, and the Christmas festival combined with a breakfast with Santa which Tessa hosts at her restaurant. Of course, these occur with snow sprinkled around and Christmas lights twinkling everywhere to add to the Christmas feel. The final theme is the romance that has been developing between Tessa and Justin, her first husband’s best friend. There is just enough romance to add a bit of warmth to the book, without making it overly romantic and veering into the romance book genre. It’s easy to develop a hope that Justin and Tessa provide you with a happy ending, at least it’s easy for those who like happy endings in their books. That’s all I’m going to say about that, as you will have to read the book yourself to find out what happens to them.

I read an advanced copy of this book from Poisoned Pen Press and NetGalley. The opinions expressed here are entirely my own.

The Enemy You Gnocchi available at:
Amazon
Books-a-Million