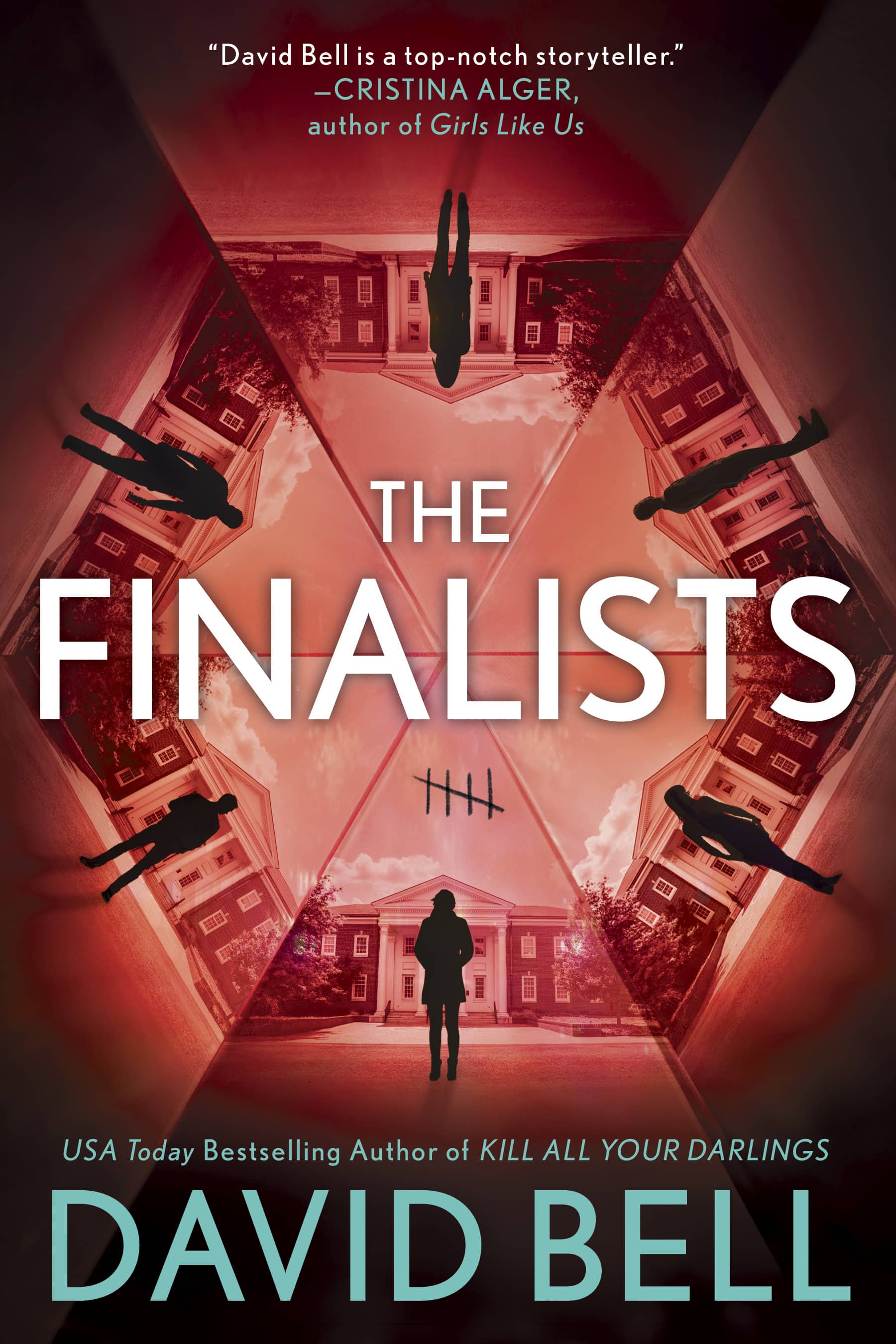 Six wildly different college students find themselves vying for a prestigious fellowship by being locked in an aging Victorian house without any electronic devices. The students are not allowed to leave until they spend eight hours in the place—but if the students leave before time is up, they’ll be immediately disqualified. When one of the six finalists drops dead, the other students fear they’re being picked off one by one. With a violent protest raging outside, and no way to escape, the survivors viciously turn on each other.

THE FINALISTS is a chilling and profound look at the lengths both students and colleges will go to survive in a resource-starved academic world.

A note from the author:
“I’m very excited about THE FINALISTS. Because it’s a locked-room novel it presented me with some of the biggest challenges I’ve ever faced as a writer. I also think I managed to pack more twists and surprises into this one than any of my previous books. I can’t wait for everyone to read it in July.”

The house sits on the far eastern edge of campus, nestled in the woods among the sycamores, the maples, and the white oaks, all older than the college. Older than Kentucky itself. To reach it by car, one must turn left off the main road that rings the circumference of the campus onto Ezekiel Hyde Lane, a narrow, winding strip of asphalt that cuts through the trees, enters the clearing, and ends in the small parking lot on the side of Hyde House. On foot, the house can be reached by way of the numerous paths that cut through the trees and give the campus its natural beauty.

I step out of my car and look back up the road I just travelled, and it’s easy to believe the world doesn’t exist, even though the rest of campus is just a third of a mile away. Standing on the Hyde House grounds can feel like standing in another century, which is exactly the way Ezekiel Hyde, the founder of the college and its first president, wanted it to stay.

The sun is bright, and its rays hit the windows of Hyde House, reflecting the light, capturing the morning glow.

Is it weird to say the sight of that house still lifts my spirits?

I climb the portico steps to the Neo-Federal structure. Up close the brick is more weathered than I realized. I reach for the brass knob, which is tarnished. The heavy black door needs to be repainted. For years, the college’s board of trustees has wanted to renovate the house, but the money is never there. The college has a list of projects that never gets done.

I pull on the knob and, not surprisingly, find the door locked.

I step off the right side of the portico, my shoes sinking in the soft soil, and press my face against the window. I’ve been in Hyde House many times for college events and know the layout well. I’m staring into the Music Room, the space where Major Hyde, his family, and subsequent generations of Hydes came to listen to recitals on the piano. The piano originally moved to the house by Major Hyde fell into disrepair and was sold in the 1990s, but a music stand remains along with a bust of Major Hyde’s favorite composer, Wagner.

The sun warms the back of my neck. I wait on the lawn in front of the house. In the distance, the campus is quiet on a Saturday morning in April. The students sleep off the night before. Purple hyacinths bloom in the flower beds, and I catch their overwhelming scent. A robin chirps in a nearby tree.

I want to call Rachel, apologize for our fight earlier. Money. We only fight about money. We have to decide whether to get new windows or a new roof, and we disagree about which is the higher priority. Our household is like the college—there’s never enough money to go around.

But before I can hit the call button, the phone rings.

“Hey, Grace.” I try to keep my voice buoyant and not let any irritation show, even though my boss—the president of the college—is calling to check up on me. But she’s not just my boss—she’s my friend. She and Rachel belong to the same book club, and just last weekend, Grace and her husband Doug came over to our house for drinks. “How are you on this fine morning?”

“Is he there?” she asks. She cuts to the chase. Today is about business. On another day, we would talk about our kids—Grace’s oldest son Michael is in the same grade as my oldest daughter, Rebecca—but I know Grace has other things on her mind.

“Damn it. When did you talk to him last?”

“It’s been about a month. And that was just a short email.”

“He did? I thought he was still living in Lexington. He didn’t tell me.”

“He’s lost both his parents in the last year. That’s a terrible blow for anyone. And I know he was close to his mother. Very close.”

“Maybe that’s why he moved to California. His mom was his last real family tie here.”

“I’m worried about this, Troy. He’s not connected to the college or to Kentucky the way the Hydes always have been. You know as well as I do his father would never leave us twisting in the wind.”

“You’re absolutely right. I’m worried too. Nicholas is pretty much the only living heir of Ezekiel Hyde. Certainly the only direct descendant. And he controls the estate.”

“And they’ve been giving us less and less every year. For the last decade. And it’s been coming to us later and later every year, which makes it harder to budget and plan. Is it too early for a drink?”

“A bit. But if you want to get one tonight, you know our patio bar is always open to you and Doug.”

A car comes down the main road and turns onto Ezekiel Hyde Lane. It makes the slow, winding run in my direction and pulls up and parks next to mine. An older model with a dent in the fender. A middle-aged man steps out, trim and tall. He wears a dark suit with a white shirt and thin black tie.

“The students are starting to arrive. I think this is—”

“Troy,” Grace says, “remember what we talked about.”

I know right away what she means. The 100 More Initiative I’ve been working on for the past two years.

“I think it’s fantastic you want to increase the number of minority and first-time students at the college. That’s why we promoted you to this position. It’s not just because you’re my friend and a nice guy. It’s to raise money. But we’ve been falling short. You’ve been falling short. The Hydes are giving less, so we need to raise more from other sources. And the board is—”

“Nicholas promised us the money for 100 More. Two million dollars. We shook hands on it.”

“Do you know how much a handshake is worth?” Grace asks. “Don’t let him leave without getting a real commitment. Okay?”

“I’m sorry, Troy, you know I am, but I don’t have to remind you of what’s at stake. For the college or for you personally.”

“I get it, Grace. We’ll toast our success tonight, have a drink around the fire.”

The man in the dark suit comes my way, almost marching. Back straight as a flagpole. A chin made of granite. His heels clacking off the pavement, his hair is cut close to his head.

“Grace, the students are—”

The man reaches me, extends his hand. He doesn’t seem to notice or care that I’m on the phone.

“Vice President Gaines, sir. It’s a pleasure to meet you. I’m James Stephenson. Retired, United States Army. Thank you for the opportunity to compete for this scholarship, sir.”

We shake. My hand feels like it’s been slammed between two bricks.

“Sir, I know no Black student, indeed, no student of color, has ever won the Hyde Scholarship. I’m intent on being the first, and I want to thank you for the chance.”

“Well, it’s not me. It’s the Hyde Family and their board—”

“Sir, I was wondering if I could express some concerns to you before we began—”

“Troy, are you there?” Grace asks.

“Just a minute, Grace. Can we speak in a moment, Mr. Stephenson—”

“Okay, Captain Stephenson. Can we speak in a moment?”

He remains in front of me, hands folded behind his back. Parade rest. His shoes are so polished and clean they reflect the sky like the windows of Hyde House.

I hold up my index finger. “Just one moment.”

I walk fifteen feet away and switch the phone to my other ear. “Okay, Grace, I’m back. But you don’t have to tell me again that I’ve missed my fundraising quotas two years in a row. I’m well aware—”

“No, Troy, not that. Something else. Something about the scholarship process today. I’m afraid we have a situation brewing there. And you need to be ready for it.”