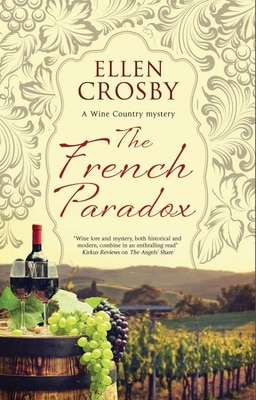 Uncork a good bottle of wine, find a comfy chair, and curl up for a relaxing read. Of course, the wine is optional, as is the comfy chair. Where you read as well as wine and other treats will make little or no difference to your enjoyment of The French Paradox by Ellen Crosby.

This is the eleventh book in the Wine Country mystery series, featuring Lucie Montgomery, her friends and family, and the beautiful wine country of Virginia that borders the Blue Ridge Parkway.

It is not necessary to have read other books in the series, although if this is your first book in the series it may take a minute or two to catch up with who’s who and what their relationship is to one another. Crosby explains major relationships, which helps place various characters, and the mystery itself is completed within this book.

In addition to Lucie, wine owner and amateur sleuth, some of the prominent characters are Quinn, Lucie’s fiancé, her French Grandfather, her sister and two long-time family acquaintances, Cricket the soon to be nonagenarian who presides over her home, Mon Repos and her daughter, Harry (Harriet). There are numerous additional characters, who are well drawn and have sufficient depth to help the reader keep them apart, even if they haven’t read other books in the series.

For this novel, Crosby fictionalizes relationships with Jacqueline Kennedy Onassis, beginning in her youth when she was Jacqueline Bouvier.  For the purposes of this book, Crosby creates a relationship between Lucie’s grandfather and Jackie that has, until now, been unknown, in part because of Jackie’s almost fanatical preference for privacy. While the relationship begins and ends when Jackie is touring France as a young woman, there continue to be references to her visiting the wine country throughout the years along with emphasis on her desire for privacy. That privacy is being threatened as Harry is planning to reveal details from a diary that has accidentally been left in her hands.

The victim, who is a premier garden designer and climate change expert, has agreed to take a look at some of Lucie’s vines that are dying. There is some discussion about how climate change is affecting wine growing, although it serves only to punctuate some of the story and is not a central focus.

Most of the attention of the story centers on Jackie and Lucie’s Grandfather relationship which in turn spurs Lucie into trying to solve the murder. She has further incentive because her sister is painting a mural at Mon Repos and is one of the few people who saw the victim in the last hours before he died and is now a suspect.

There are multiple lines of inquiry throughout the story, including who is the man Lucie’s sister is living with? What does the victim’s revelation of a faked research study have to do with his death? How much of the relationship between Jackie and Lucie’s grandfather is Harry planning to reveal? Was the argument between the victim and his husband serious enough to cause murder?

As complex as this book sounds with multiple characters/suspects and a plethora of possible motives, it is easy to follow and enjoyable from several standpoints. The mystery is well plotted and moves at a good pace toward the conclusion. The characters are well drawn with sufficient depth to make it easy to keep them apart, and the references to the beauty of the area make it enjoyable and a respite from the ordinary day to day activities.

Written in the cozy style of mystery, more emphasis is placed on character development than on the murder itself. There is also time and attention given to Lucie following clues and interviewing people as well as finalizing plans for her upcoming wedding which serve to make it a refreshing, gentle read that gives the reader an idea of what a visit to the wine country of Virginia might yield without so much as making it feel like a travelogue. The conclusion is altogether satisfying and logical.

My thanks to Severn House, Canongate Books for an advance copy of the book for this review. The opinions expressed are entirely my own.