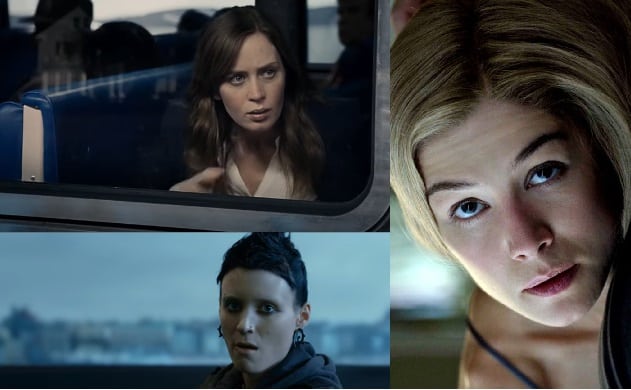 The Girl In Trouble

Where did our obsession with “girls” in mysteries and thrillers come from? It’s a tale as old as time.

Girls with tattoos, girls who ride trains. Girls who are pretty, who are good, who are gone.

We’re fascinated by the plight of the girl in the modern mystery or psychological thriller, whether she’s an out-of-work writer, an alcoholic

divorcee, or a talented computer hacker. But why do we casually accept these protagonists as “girls”? Why not call them women, which is what they are? Even if you can get the ageless Rosamund Pike or waifish Rooney Mara to play your leading lady in the movie adaptation, it doesn’t change the fact that their characters are well past being girls. So, what gives?

The answer is that in these stories, a girl is not defined by her age. She is defined by her state. And these so-called girls? They’re vulnerable, powerful, intuitive . . . and a little messed up. All hallmarks of the girl in trouble we grew up with. The one we know, love, and relate to.

So where did it all begin?

The story of the girl in trouble is irresistible. It’s the basis for some of the earliest stories we’re told, especially in the realm of fairy tales: Cinderella, Snow White, Sleeping Beauty—and if you want to go full Disney—The Little Mermaid, Beauty and the Beast, and even Aladdin, which is both a boy-in-trouble and girl-in-trouble tale. On the surface, these classics are simple enough. An innocent girl with fairness and beauty that borders on supernatural (when was the last time a mouse helped you clean house?) finds herself under attack by a jealous, hateful villain. More often than not, this villain is an older woman who has lost her fairness, her beauty, her youth. Yuck. Who wants to be her?

The girl’s not perfect. She’s allowed to make mistakes. Ariel sneaks around shipwrecks behind her king-father’s back. Aurora talks to hunky strangers in the forest. Cinderella allows her mice to steal accessories from her stepsisters. That’s okay. These infractions are minor and can be forgiven. Because in the end, the girl is worthy of reward. She is good, and she will come out on top.

But that’s not what we really want to see.

Why do we love a girl in trouble?

Here’s the dark side of the girl in trouble trope. We don’t read or watch along because we want to see good things happening to good girls. We want to see the bad things. Yes, even as kids. We want to see Cinderella forced to work from sunrise to sunset, a prisoner in her own home, her mother’s dress torn to shreds in a jealous rage. We want to see Snow White exiled from her kingdom, scared and alone in the woods. We want to see Belle, deeply misunderstood by her fellow townspeople, taken captive by a terrible beast.

Why do we want to see these things? Maybe it’s because bad things happen to us in real life, too. People treat us unfairly or hurt us. We want to know that we’re not alone, and that things will work out. Or better yet, that the villain gets their comeuppance.

The power of the girl

Once we grow up, we know this isn’t exactly how life works. Things are much more complicated, and there is no happy ending. When the girl wins in the modern mystery or psychological thriller, the prize comes in the form of answers, or closure, or vengeance. And unlike in fairy tales, this girl has agency. Her flaws and mistakes are larger and less forgiving, but she rises above them to personally right the wrongs that transpired. While the Disney princess remains blameless in the third-act violence, the girl in trouble in the mystery or thriller must shed her innocence, her vulnerability, and finally see the ugly truth of the world—the marriage built upon lies, the killer wolf in sheep’s clothing—and rectify it. Mess with the girl, and she’ll make you pay.

Where do we go next?

Even if the trend of “girl”-titled books dies out, the girl in trouble story never will. That said, maybe the next phase of catchy bestsellers will be the woman causing trouble. Maybe it’s time to hear the stories of the struggling stepmothers, the deposed queens, the sea witches. After all, there are two sides to every story, and it’s more fun to make trouble than to be in it.