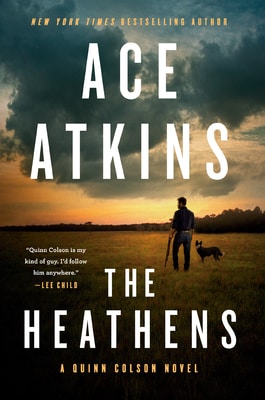 The Heathens by Ace Atkins is number eleven in the Quinn Colson series based in Tibbehah County, Tennessee.

Colson, a previous US Army Ranger, remains the sheriff of Tibbehah County and is mostly recovered from his injuries from a previous novel. In The Heathens, Atkins brings back familiar characters, while introducing new characters, including a bizarre and deadly father-son duo named Dusty and Flem Nix. The pair is as amusing as they are dangerous, possessing drives nearing psychopathy. Johnny Stagg also re-emerges, this time claiming to be a reformed community member. Stagg is with plans to open a family-oriented entertainment complex rather than being a provider of multi-county vice and adult entertainment, leaving readers to wonder if Stagg really has changed or if he is still a criminal chameleon.

(One question I would love to ask Ace Atkins is if his Johnny Stagg character is based upon actor Harry Dean Stanton).

The main story opens with the disappearance of a party-girl mother to troubled juvenile TJ Byrd, leaving TJ to care for her younger brother. Soon, due to TJ’s well-earned delinquency filled reputation and because of accusations of misdeeds by her mother’s boyfriend, TJ soon becomes the suspect of a horrific crime involving her mother. TJ, her brother, best friend, and boyfriend Ladarius McCade, flee the county to escape being arrested for offenses she claims they did not commit. The four then go on a multi-state journey with each mile only adding to the troubles they are fleeing. Soon, the four meet a spoiled and troubled well-off young woman who turns TJ into a viral social media star that has falsely been accused of a depraved crime.

With law enforcement officials in pursuit, including US Marshal Lillie Virgil, the Nix brothers soon join the chase, with Sheriff Colson being the only one around skeptical of TJ being the one responsible for the crimes she has been accused of and with hopes of bringing her home without further bloodshed.

Of the eleven novels in the Quinn Colson series, Ace Atkins has yet to write a weak or off the mark installment and allows his characters and stories to evolve without becoming stale or redundant.

Netgalley provided an advanced reader copy for the promise of a fair review.