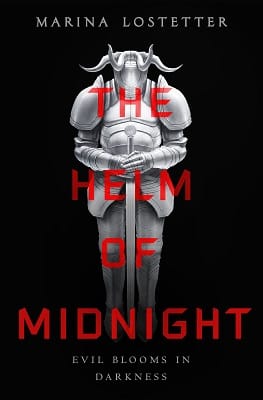 The Helm of Midnight

In a city of magic and masks, Regulators must keep the tightly-guarded peace, preserving the strict laws of the land. Not as easy as you might suspect when under regular attack by beastly varg and a killer recently returned from the dead. But De-Krona and De-Lia Hirvath, sisters by birth as well as by Regulator service, are more than capable of meeting their challenges head-on.

In The Helm of Midnight, we meet them as chaos is loosed upon a high-society gathering, resulting in the theft of the Mayhem Mask of Louis Charbon – better known as the Blooming Butcher. The clue’s in the name, and it’s not long before we get to see his work, grotesque and beautiful sculptures made from the victims that could have been pulled straight from an episode of Hannibal. But this is no simple serial-killer thriller dressed up with a fantasy setting – there’s a lot going on in this book, and murder is only the beginning.

It took me time to get into this book – it’s the first in this setting, and the author wasn’t skimping on world-building. For the majority of the book, the chapters are split among three characters, at different points in time, too, pulling the reins a little on the reader as it switches between them. It made for a more leisurely start than the initial heist scene suggested, though I appreciate an author with the confidence to make sure the foundations of a world are stable.

Once the initial world-building and scene-setting gave way to the story proper, however, I was SOLD. The author has a knack for little human moments that make her characters solid and real – and brings scenes to life in the reader’s mind. This book features a very diverse range of people, too – main characters and background both, which is something fantasy novels don’t have a tremendous track record on. No such issues here.

The world itself wanders off the usual fantasy track, too – this is no medieval world plus magic. Despite the odd cottage, most of the descriptions of the world are more likely to associate with the Brutalists, all clean angles and palettes of red, black, and white. The spare but vivid descriptions of characters and places fit into that aesthetic, reinforcing it with their nature as much as their meaning – this was a book that felt like it was written by one of the characters from the very world it describes.

Despite those early issues, the overall experience with The Helm of Midnight is a very exciting one. This reads very well as a stand-alone, but there’s a huge world here, one that I hope to see the author spend more time exploring.