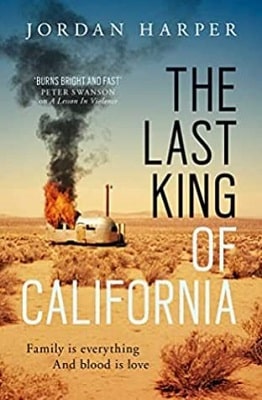 The Last King of California

In Jordan Harper’s The Last King of California, nineteen-year-old and somewhat milquetoast Luke Crosswhite finds himself directionless and decides to leave college from Colorado and return home to Devore, California. This is no easy task for Luke because he is the son of the infamous and imprisoned Big Bobby Crosswhite.

Big Bobby, in prison for murder, is the exact opposite of Luke and helms a group known as The Combine from prison. The Combine is a tight-knit group of criminals made up of people with their own rag-tag criminal skill sets and is held together by an extremely enforced level of group loyalty.

While Big Bobby has been in prison, The Combine has been led by Big Bobby’s brother, Del, with The Combine’s purpose to remain small enough to fly beneath the radar of other area criminal groups while still remaining profitable and prosperous.

Upon Luke’s arrival home, he finds his Uncle Del has taken in a number of other criminals, one of which lives within Luke’s old bedroom, forcing Luke to live in a dilapidated trailer behind his former home.

At first, Luke is seen as weak by the others and is then faced with either transforming his entire being into someone befitting acceptance into The Combine or remaining to be treated as an almost ostracized outsider.

Because of his own insecurities, even Luke does not realize how intelligent he is until after a violent epiphany of his own. It is then that he starts to change, soon realizing he may even be turning into a man more like his father every day than the timid teen that first returned home.

Unfortunately for The Combine, another criminal group known as the Aryan Steel decides to expand its grasp within the region with plans to force other groups to pay them a tithing. The Aryan Steel is led by a man named Beast Daniels. Daniels is a sociopathic and sadistically violent leader and is introduced to readers with the portrayal of the killing of a man in a horrific manner to solely send a message to any others with thoughts of going against or ignoring the expansion of his group.

At the same time with the possibility of being swallowed up by the demands of Beast Daniels, The Combine and other area residents are also faced with the encroachment of massive, once-in-a-lifetime California wildfires.

The novel then continues to focus on the further evolving Luke, The Combine’s likely eradication by a larger crime group, and its own troublesome internal problems.

When it comes to a reader deciding whether or not to read Jordan Harper’s The Last King of California potential readers should be aware that this is not a novel focusing on White supremacy or racist groups. It is simply a very well-written crime novel where in the plot, the villains exist in such a group and actually are more like tertiary characters used to most effectively drive the main plot.

The Last King of California is highly recommended to fans not only of crime fiction but all fiction as well.

Readers are also encouraged to seek out his 2017 crime novel She Rides Shotgun (AKA A Lesson in Violence).

The Last King of California was provided by Netgalley on the promise of a fair review.