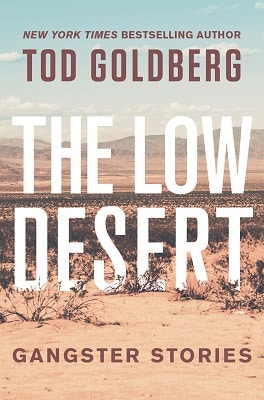 The Low Desert – Gangster Stories by Tod Goldberg is a collection of twelve tales of assorted characters found mostly in California, centered around the Salton Sea, Las Vegas, or connecting areas.

Most of the characters—both decent or criminal, and some more likable than others—seem to be trying to extricate themselves from their current situations. Fortunately, the humans in these human stories are developed in such a way as to not be exaggerated caricatures that would render the stories meaningless. Further, Goldberg also captures the environments of his tales in vivid and palpable detail. Readers can almost feel the heat, smell the stink of the Salton Sea, inhale the desert dust, and feel the grit between one’s fingers while reading these stories.

While the opening tale, The Royal Californian may suggest stories in the collection will have determined and certain ends to those involved, further reading reveals many stories, like life, tend to end in either ambiguous or incomplete ways.

Other stories, like The Low Desert, The Last Good Man, and The Salt, deal with how later in life people are often haunted. Haunted by things like aging, death, past experiences, and the things one may have been forced to do. This retrospection may be just as daunting as the experiences carried out in one’s life. And as these characters are haunted, they still scratch on in the best way possible, with hopes the continued struggle may offer some sort of respite, solace, or redemption.

Stories like The Spare, Professor Rainmaker, and Ragtown introduce us to characters who may think of themselves a bit smarter than everyone else, and in moving forward with solutions that just may not work out too well for them.

The Low Desert expertly captures the environment of hard lands, hard people, and the breaking of spirits.