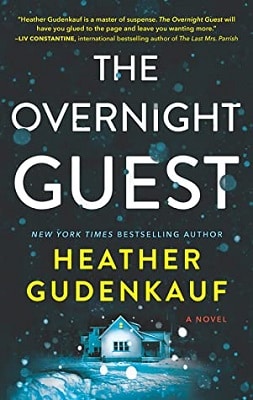 A psychological thriller that will make you lock your doors and tell people to leave you alone because all you want is to read this book.

Wylie Lark writes true crime books. Part of what makes them so successful is that she spends time where the crimes were committed. Her latest crime scene retreat is a remote farmhouse where a daughter survived when her family was killed and the daughter’s best friend, who was spending the night, went missing. The crime was never solved, creating a more than spooky environment for her.

Wylie, along with Tas, a geriatric dog she found at the farmhouse, has been at the farmhouse for six weeks, enduring brutally cold weather already. She should have been out of there after a few weeks, but something keeps her there. Her manuscript is finished, but she’s not content. After a trip to Burden, the nearest town, she’s back at the hundred-year-old farm when a blizzard hits. Not only is she snowed in, but she has accidentally destroyed her cell phone. However, she does have a landline and a 9 mm gun.

When the dog finds a mute boy in the snow, she knows something is dreadfully wrong. After helping him get warm, she heads out to see if she can find any reason why this boy was out there alone and freezing. Up at the road, she finds a truck that’s been in an accident and a woman tangled in barbed wire. Wylie hurries back to the house for wire cutters, but when she returns, the woman is gone. Not long after, the woman shows up at the farmhouse. All of this is tense enough but only begins Wylie’s life-and-death struggle with a man who comes searching for the woman and boy.

Heather Gudenkauf has written her best psychological thrillers yet, a combination of a locked room story with an atmosphere of In Cold Blood. Creepy, scary, and suspenseful, Gudenkauf manages three storylines that increase the suspense at every turn —the current Wylie story, the original story of the murders, and the chilling voice of a child. Each storyline flows smoothly into the next and sets up what is at stake in each one. With brilliant detail of setting and character, this thriller came alive. When I was interrupted in my reading for weeks, I returned to the book coincidentally after a blizzard dumped a foot of snow here in Oregon. Sometimes I was reading in complete darkness when the power went out. I couldn’t have done that if I didn’t have my husband and dog with me because Gudenkauf puts you right in the characters’ shoes. Although I did want to know who was responsible for the original murders, I was more invested in the characters because I knew something horrific had happened to them, and Gudenkauf made me care for them.

She masterfully sets the novel in her home state of Iowa, giving the reader the small sensory details that make the novel pop off the page—scratchy rustling sounds, stagnant air, splintered cedar railings. The fictional town of Burden (what a great name) develops as we see the Elks Lodge, Shaffer’s Grocery Store, and the pharmacy that sells “shabby” red and pink hearts for Valentine’s Day. A small town that sticks in our memory and a rural countryside that Gudenkauf knows well.

This is Gudenkauf’s ninth novel, all standalones. As Publishers Weekly states, “Gudenkauf is at the top of her game.” I wholeheartedly agree.

Thank you to Heather Gudenkauf and her publisher Park Row Books for allowing me to read an advanced copy in exchange for an honest review.

The Overnight Guest available at:
Amazon