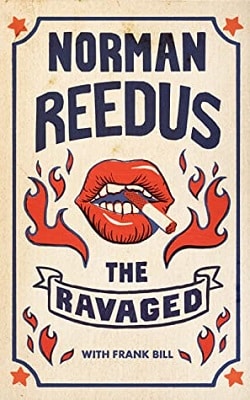 “Life is messy. Grit and grace come at us fast, side by side. Sometimes the grit becomes overwhelming and diminishes our spirit. What’s good seems lost and gone forever. This is a story about the pathway back to what’s beautiful, when the way back seems impossible.”

― Sharon E. Rainey, Making a Pearl from the Grit of Life

As a reviewer, I rarely come across a debut novel that moves me so completely and leaves me speechless at the end. The Ravaged is a gritty, honest debut novel by Norman Reedus and Frank Bill. The writing is absolutely brilliant and unputdownable after the first page.

The story follows three separate individuals who are trying to escape their lives for different reasons. Jack has spent all of his life working and providing for his family, but at 65, his wife has died of cancer, his daughter has committed suicide and his son is an addict. He has escaped to Chile on his late mother’s advice to run and not come back and he now walks solo with no money and no identification, carrying the heaviness of regret and grief wherever he goes. Hunter, a motorcyclist and motorcycle repairman, has left his job at a local garage because of his abusive boss, and taken Ruby, his boss’ dog with him. He finds out his father has passed away in a mysterious fire and he and his two best friends, Itch and Nugget, take a motorcycle pilgrimage across the country from North Carolina to California, helping people along the way, in the spirit of his father. Anne, a young teenager, is escaping an abusive home and the possibility that she may have murdered her brother after hitting with a frying pan. She and her best friend, Trot, learn the fine art of train hopping and there they find Cinnamon, another teenager who is an expert at the fine art of being homeless and proud.

This first novel by Reedus, he writes a harsh and gritty account of three very different people.  The stories do come together, interestingly, but what really stuck with me was how each protagonist learns about family and what is really important and how family can mean something different for everyone. Anne comes from a poor family with alcoholic and abusive parents but finds a new family in the group of homeless teenagers and children she meets along the way. Hunter, a loner, meets new family on his journey that he didn’t even know about. Jacks sees all kinds of families in Chile and then Colombia, doubling his regret at missing most of his children’s formative years.  There is hope in each single journey. Reedus and Bill have written a sometimes harsh, and sometimes heartwarming novel that will stick with me for a long time.

The Ravaged is available at:
Amazon