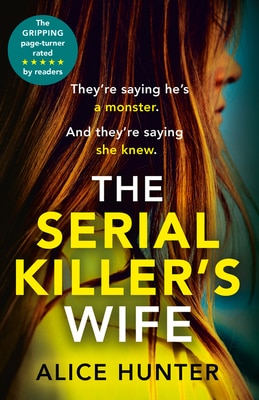 Beth and Tom Hardcastle seem to have a perfect life with a happy marriage and a delightful three-year-old daughter, Poppy. They recently moved from London to Banbury, a small town where Beth runs a café and ceramic painting business, while Tom commutes to work in finance.

Beth has been accepted into the community but is still struggling to break into the local friendship groups. Tom works long hours and is hardly ever home but is generally accepted by all as a nice family guy. That is until the day when a knock on their door turns out to be police wanting to question Tom regarding the disappearance and probable murder of his ex-girlfriend Katie eight years ago.

Local gossips can’t believe Beth doesn’t know anything about Katie’s disappearance. Could she really have been married to a monstrous killer all these years without knowing? At first Beth is supportive of Tom, claiming there is no way he could be a killer without her knowledge. Besides, the police haven’t found a body so how could they have new evidence after all this time? However, as time goes by it’s clear that Beth is holding something back from the police that might be damaging to Tom’s claims of innocence. In fact, both Beth and Tom have secrets they are keeping from each other as well as from the police.

The thriller starts with a good pace, raising tensions and questions about Tom and Beth’s relationship and what Beth really knows about Tom. The writing is patchy in places, slowing the pace and losing momentum around the middle of the novel, as Beth indulges in a lot of hand wringing about what to tell the police and whether her daughter Poppy will be okay. With her husband sitting in goal about to be tried for murder, most women would be frantic, but not Beth. She is a difficult character to feel sympathy for as she blurts out secrets to people she barely knows and neglects the café and her business assistant. Her growing friendship with recent widower Adam Wright seems unwise and some of her decisions don’t make sense. The pace and suspense pick up again in the second half of the novel as more about Tom is revealed. And the clever twisty ending will shed some light on Beth’s sometime puzzling behaviour.

Overall, this is a good first novel with an intriguing title and an original hook that will soon have you reading addictively to find out about the serial killer’s wife.

With many thanks to Avon Books UK and NetGalley for a copy to read. Expected publication date: May 27.