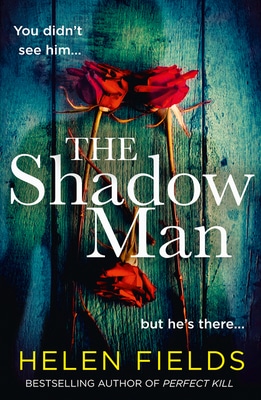 After developing a strong DI Luc Callanach series, Helen Fields sets about dazzling her readers with yet another superb standalone novel. The Shadow Man is not only a great police procedural, but also pushes the genre to the limits with one of the most unique serial killers I have come across in all my years reading.

Steeped with action, suspense, and some psychological chills, Fields proves that she is a force to be reckoned with when she puts her mind to it. Fans of her past work the genre in general will surely find something captivating in this piece, though it will also keep them up well into the night.

Dr. Connie Woodwine has been called in to help work a case within Police Scotland’s Major Investigation Team (MIT). An American, Woodwine brings her experience as a forensic psychologist to a baffling case and is teamed up with DI Brodie Baarda, based in Edinburgh. A woman’s found slain in her bed and the best friend who had arrived to see her is kidnapped from the driveway. Woodwine and Baarda have no idea where to begin, as the forensics are scarce and the leads non-existent.

After word comes over the wire that a teenage girl was abducted in plain sight by a gangly, skeletal man outside a library, Woodwine and Baarda try to determine if this is another abduction or an extrapolation of their own case. Still, there is little on which to go, save the eerie description by another youth. Still, it’s something for the time being.

Meanwhile, in an undisclosed location, the two victims begin to see that they are playing parts in a sick a sadistic game with a man who fancies himself already dead. His emaciated body is disgusting enough, but the ‘play acting’ he has them perform while in captivity takes things to a whole new level. He almost encompasses the role as head of a family, one that meets his every needs. As the kidnapper continues to add to his brood, his more violent side comes out, making him a threat in an entirely new way.

Woodwine and Baarda begin to piece things together, though extremely slowly. It is nothing that will guarantee solving the case, but this sliver of information could help expand the search parameters, while they wrestle to comprehend the killer’s physical and psychological anomalies. They’ll need to stay on top of things if they hope to save those who have been taken and find justice for those whose lives have already been extinguished.

I got a kick out of reading the comments made by some about how ‘pleasantly surprised’ they were to see this novel come from Helen Fields. In my humble opinion, this is Fields in and out, pushing the boundaries and bringing police procedurals to life with strong narratives and stellar characters. Set again in Scotland, the reader gets that brogue feel within the banter as a killer seeks to exact their own form of tortuous behavior to allay their own fears.

Connie Woodwine and Brodie Baarda definitely share the spotlight in this piece, with the former’s ‘foreignness’ definitely receiving a little added focus. Woodwine’s own backstory adds something to the story, after she suffered a brain injury as a teenager and ended up as an achromat, unable to see color whatsoever. Living her life in black, white, and shades of grey, Woodwine is able to get to the core of the case with her exceptional determination throughout the piece. Her banter with Baarda’s whose past seems much less exciting, proves to be a key element to the novel’s success. This is a duo that works so well together, one can only imagine if it will spin into a series to rival DI Luc Callanach.

By and large, the secondary characters are wonderful with the central antagonist, Fergus Ariss, proving masterful. His body is plagued with an illness that is only revealed in the latter part of the novel, though his mental rationalizations prove baffling throughout. Ariss uses those who fall into his clutches so well and creates this secondary world that readers cannot help but discover in the well-paced narrative. Ariss does well to keep the flow of the story going as he tries to build up his familial empire one victim at a time. There’s little time to rest as the story’s flavor gets deeper and more alluring as the chapters flow. Those who support both the protagonists and the antagonist find themselves perfectly placed, developed effectively throughout.

Helen Fields does a stunning job with this piece and keeps her readers locked in until the final page turn.  The story begins at high speeds and does not diminish at any point, allowing the reader to see the gain in momentum as it parallels the development of the plot and ingenuity of its delivery. With short chapters to lure the reader, Fields paces herself as she drops breadcrumbs throughout, only to leave the reader wanting more. As I mentioned above, this has a series debut feel to it, though I have not heard anything about this from the various websites I’ve scanned of late. I suppose we’ll all have to wait and see what transpires.

Kudos, Madam Fields, for another great read. I am eager to see what else you have in store for your fans.

END_OF_DOCUMENT_TOKEN_TO_BE_REPLACED

A stranger approaches with offers of revenge in this police procedural