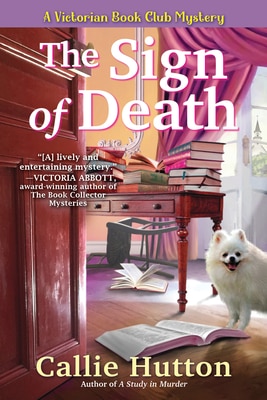 Take a simple murder, add a dash of romantic fiction, sprinkle a bit of humor on top, and place it in Bath, England in the Victorian era. What have you got? The Sign of Death, second entry in Callie Hutton’s Victorian Book Club mystery series featuring Lady Amy Lovell and Lord William Weathington.

The Sign of Death opens with humor as William is presented with the information that his mother intends to move to Bath and into the house with him. While he puts this aside to participate in the weekly book club meeting to which he and Amy both belong, it is never far from his mind. Almost immediately, thoughts of William’s mother and Amy’s publisher are overshadowed by the murder of William’s man of business whom William has begun to suspect of falsifying his business records. As the information unfolds, not only are William’s suspicions confirmed, he discovers his own signature has been forged on additional documents thereby implicating him in a number of illegal schemes.

As in the first novel in the series, the police leap joyfully into the easy solution and declare their belief that William is the murderer; much as they did in the first novel except that it was Amy who was their chosen suspect. This spurs Amy and William to begin their own investigation, not trusting the police to look for other suspects but rather to search for information that verifies their suspicions. The problem with their involvement? How to keep it from Amy’s father and brother, William’s mother, and the police. It becomes even more complicated when there is another murder, and the police are certain this is also attributable to William. So certain are they of his guilt they issue an arrest warrant and William is forced to seek the help of the barrister who previously assisted Amy as well as apprise his mother and Amy’s father of his predicament. While they are sympathetic to his difficulties, William and Amy both know they must continue to keep knowledge of their investigative activities a secret from Amy’s father and brother.

The entire book is a delightful, easy read with just enough references to allow the reader to enjoy a visit to Victorian England while their attention is drawn to Amy and William who are both forward-thinking, liberal young people. There are numerous clues and red herrings which allow the reader to try and solve the murder before the killer’s identity is revealed. At the same time the mystery is being pursued, the relationship between Amy and William is growing and will satisfy anyone who wants a helping of romance with their mystery.

While The Sign of Death is an easy beach or airplane read, it is also engaging enough to read in one or two large chunks of time, whichever is the reader’s preference. The resolutions for the murder, Amy and William’s relationship, and Amy’s identity as a writer bring the book to a satisfying close. I would recommend this book to anyone who wants a light read that doesn’t have a great deal of angst and has a healthy dose of positive characters. I look forward to the next book in the series to see what new adventures Amy and William attempt as well as perhaps getting more acquainted with William’s mother.

My thanks go to Crooked Lane Books and NetGalley for providing an advance copy of this book for review. The opinions expressed here are entirely my own. This book is scheduled for release on April 13, 2021.