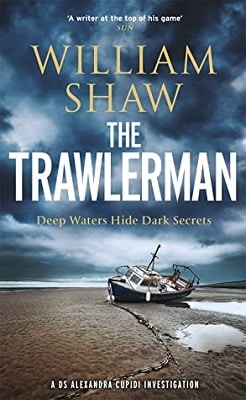 In The Trawlerman by William Shaw, DS Alexandra Cupidi returns for her fourth novel as the main character in the series.

The novel opens with Cupidi placed upon leave for post-traumatic stress and finds her troubled with nightmares and ominous premonitions. While at a local cafe, suddenly sensing something terrible is about to happen, Cupidi intercedes when a newlywed couple is confronted by a knife-wielding woman claiming one of the pair murdered her son.  After restraining the woman for the police, Cupidi’s interest is piqued and she tries to learn more of why a distraught mother would arm herself and confront a couple over her missing, presumed murdered, son.

At the same time, an older married couple is found murdered with their nude corpses left behind and posed in a strange manner. With only a bizarre inscription in blood upon the walls, the lack of clues and forensic evidence point to a true whodunit.

Officer Jill Ferriter, a close friend, and colleague of Cupidi’s is part of the investigation and tight-lipped around Cupidi due to her leave status. Though Cupidi has been repeatedly cautioned from participating in any sort of investigation, such warnings and leave status do not impede Cupidi’s interest, ending with her own under-the-radar investigation of both the double murder and the mysterious missing man claimed by his mother to have been a victim of murder.

During all of the turmoil in Cupidi’s life, including her strained relationship with her daughter Zoe and her continued guilt over her past with former detective Bill South, Cupidi also embarks on a cat and mouse flirtatious encounter with a psychologist she learns is the best friend of the murdered husband and someone who may not be what he claims to be.

When it comes to the novels of William Shaw, one thing he is adept at is allowing his characters to breathe and realistically develop. The crimes are also solved in a logical and methodical way while avoiding great leaps of implausibility. His novels also unfold smoothly and like that of dining on fine food or beverages. One of the worse things about his novels is knowing after completing the most recent one, the reader knows patience will be needed before his next novel appears.

William Shaw’s Det. Cupidi novels are highly recommended and readers are encouraged to start with the initial novel The Birdwatcher featuring Bill South.