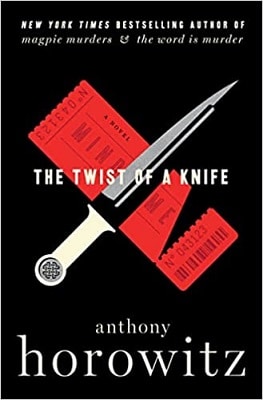 The Twist of a Knife

Anthony Horowitz’s crime series featuring a semi fictional version of himself alongside fictional ex detective Daniel Hawthorne continue to be a lot of fun. In this fourth episode, Horowitz’s contract to write three books featuring Hawthorne’s PI investigations has been completed and he has told Hawthorne he doesn’t want to do any more.

Apart from the fact that Hawthorne treats him like an idiot and never tells him what’s going on as he drags him along in his wake interviewing witnesses and suspects, Horowitz is also busy with a play about to open in London. Called Mindgame, it’s a twisted murder mystery set in a lunatic asylum. It has been doing well in a number of regional theaters and now is set to open at the Vaudeville theatre in London’s West End.

On the opening night of the play, it seemed to be well received by the audience and well attended by the theatre critics from all the major newspapers. The Director gave Horowitz and the cast an unusual opening night gift in the form of a replica dagger from his last play, Macbeth and threw an opening night party for them. While having a few last drinks at theatre before going home, one of the cast received a link to a review of the play by one of the top critics, savagely disparaging Horowitz and most of the cast. The next morning the critic is found murdered in her home, stabbed in the heart with Anthony’s Macbeth replica dagger.

Later that day, Anthony is arrested and questioned by DI Cara Grunshaw, a detective he has an unfortunate history with from his investigations with Hawthorne. When he is released on bail while the police await DNA evidence, he turns to the only man who can help him prove his innocence – Hawthorne.

Told with Horowitz’s trademark self-deprecating humor, this is an excellent addition to the series. The reader knows Horowitz is innocent but with evidence mounting up can Hawthorne prove it in time and find the real culprit or will Horowitz end up behind bars? As usual Hawthorne plays his cards close to his chest and keeps Horowitz one step behind him during his investigation. Along the way, Horowitz breaks through Hawthorne’s intense privacy to learn a few more tantalizing facts about his past as a police detective, suggesting a future intriguing story with a focus on Hawthorne is set to unfold in a later addition to the series. With a very Christie-esque vibe and Poirot style dénouement this is a very lively and engaging whodunnit.

With thanks to Harper Collins for a copy to read

The Twist of a Knife is available at:
Amazon