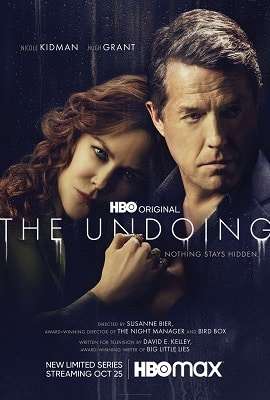 In a stereotypical brownstone on the Upper East Side of New York City, Jonathan Fraser (Hugh Grant), his wife Grace (Nicole Kidman), and their son Henry (Noah Jupe) live the high life. He’s a child oncologist, she’s a therapist, and everything seems to be going absolutely swimmingly in the way that most rich people’s lives appear to be.

Grace is on the parent committee at Henry’s extremely upper-class school, Reardon, apparently with thanks to the domineering presence of her father Franklin Reinhardt (Donald Sutherland). Everything is going well, and Grace just seems to be happy strolling the streets of Manhattan in a series of exquisitely tailored and ridiculously expensive coats and making friends with the token poor Reardon parent, the seductive yet slightly insane Elena (Matilda De Angelis).

By the end of the first episode, everything falls apart in Grace’s world. Her husband has gone missing, her friend Elena has been murdered and Reardon’s fundraiser to ‘celebrate diversity’ with a room full of white people appears to be the last place most people have seen her alive.

So begins The Undoing, a show about rich white people having their lives blown up in rich white ways. If this is giving you Big Little Lies vibes it’s for good reason—David E Kelley is behind both, but The Undoing is much more of a psychological ‘whydunnit’ than a twisty ‘whodunnit’. The show works very hard to drop clues to tempt you into thinking literally ANYONE ELSE could be the killer, but in the end it turns out Grace didn’t know her husband very well at all. This, you would assume, is why the series is called The Undoing instead of taking the title of its source, the book You Should Have Known by Jean Hanff Korelitz.

Where I think The Undoingdiffers a lot from Big Little Lies is that every single person in the show was fairly unlikable. Jonathan and Grace spend a lot of the first episode trying to demonstrate that even though they’re filthy rich they’re just like everyone else—in one scene Grace tells Jonathan the parents committee discussed art and money (“it was just vulgar!”) but it’s hard to feel any sort of sympathy for either of them. Henry is kind of a jerk to his mother a lot, and even the murdered Elena is kind of a lot before she is murdered in her studio by her lover Jonathan.

The Undoing also departs from You Should Have Known in a few key ways I think would have made the show a bit more interesting. In the book the Frasers are a middle-class family (as are the characters in the book of Big Little Lies), and Jonathan is only a character in the background—the book is much more focused on Grace trying to come to terms with Jonathan’s betrayal.

In a series full of emotionally questionable people I ended up rooting for cold hearted billionaire Franklin Reinhardt—in my favorite scene in the whole series we see Franklin sitting down at his piano and is startled by Grace coming up behind him and giving him a hug. For just a moment Franklin looks like an owl who has just discovered he can speak French. It’s a look I think I replicated several times watching The Undoing, whether watching Grace flip flop on her husband’s innocence when THERE WERE SO MANY RED FLAGS, or when I discovered that there was in fact no twist and the husband who lied about his job and his finances and his extra marital affair, was, at the end of it all, just A Bad Guy. However, if you’re in a mood for rich people being rubbish, apartment porn and Nicole Kidman strolling through Central Park in a spectacular coat with a series of increasingly worried expressions on her face, The Undoing delivers.