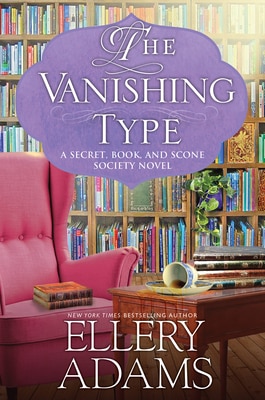 Once again Ellery Adams has created a fresh, interesting mystery in familiar surroundings in this fifth book in her Secret, Book and Scone Society series.

While this book stands alone with the mystery being completed within the novel, readers will likely want to read the series in order if they want to have the best understanding of how the characters relate to one another. The society consists of Nora, book shop owner and main character; Estelle, society member and hairdresser; Hester, society member and bakery owner; and June, manager at the local spa.

The novel takes place in Miracle Springs, North Carolina, an idyllic small town noted for its healing spa waters. Nora has opened a bookstore that is much more than just retail space, it is a tribute to her love of books and their healing power. Over the series, people have come into the store with problems or issues to solve and left with books recommended by Nora which will help them find their best solution. Hester bakes what she calls “comfort scones” and, when someone is in need, she will create a personalized one for them. June knits special socks and Estelle shows people the beauty they have within. These four women give their talents to people when they are having difficulty.

In this novel, it’s Hester who has the difficulty. Each of the members of the society have a secret which is part of what brought them together. They have shared their secrets with one another, but not with the general public. Hester’s secret is having given birth out of wedlock when she was a teenager and forced to give the child up for adoption. After birth, she was sent off to live with an aunt she barely knew and her parents turned their backs on her.

Hester was forced to give her child up for adoption as soon as she was born. Now, just as Hester has found love and is anticipating a lifetime with her longtime boyfriend, it seems her secret is about to be revealed for the entire town to know. Not only is that a problem, since Hester’s boyfriend doesn’t know about her pregnancy, but there are signs popping up all over town that indicate someone has a desire to reveal the secret and hurt Hester in the process. Her name is scraped out of a set of books, “The Scarlet Letter”,  Nora has in the shop. Other books, with hidden letters in the design art for the book covers also appear to have been deliberately placed around town, but it is unclear what their part in the mystery is.

In addition to the books, there are murders that have to be investigated. The first one is the murder of a man who is unknown to anyone in the town of Miracle Springs. Then there is an attempt on the life of a delightful young woman who works as a nanny for a local company and has plans for going to art school. Finally, later in the book, another woman is murdered and it appears it was a case of mistaken identity and Hester was the intended victim.

All these things are happening against a backdrop of life as it goes for the society members and their friends. Estelle, who has a relationship with Jack, the local diner owner is having to oversee his treatment in the hospital as he became desperately ill, Hester’s boyfriend finally proposes, June’s son is successful in obtaining a new job, and Nora’s relationship with the town’s sheriff seems to be deepening into something more than friendship. These secondary stories have been developing over the series and while not difficult to understand, the full development of them is better experienced by those who’ve read the books in order.

This series is a delightful combination of a love story of books and an excellent mystery that is well plotted, moves with an excellent pace, and has a satisfying conclusion. In summary, this is a book, and a series, that is enjoyable on many levels, particularly for those readers who like cozy mysteries. Adams is successful in bringing a story that is fresh and engaging while at the same time advancing a series that is developing some well-loved characters. She is a prolific writer, with several series to her credit, but this is the one with which I am most familiar and I highly recommend it to anyone who likes this genre.

My thanks to Kensington Books for providing me with an advanced reader copy for this review. The opinions here are entirely my own.

The Vanishing Type available at:
Amazon