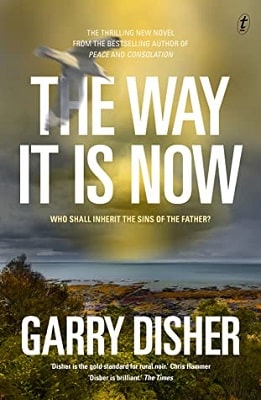 The Way it is Now

I have yet to read a Garry Disher novel that has not been an enjoyable crime novel. Garry Disher seems to be one of those rare writers that seems incapable of writing a poor novel. Even his lesser novels are still entertaining and well done.

Yes, some of his novels are stronger than others, but so far, of the ones I have read, it continues to baffle me why Disher is not more widely known outside of Australia, and especially in the United States.

Not only that, in the era of so many “re-boots” of previous movies and even television programs, it is equally bewildering why Disher’s novels and characters have not been scooped up for dramatization in either movies, or more appropriately, a television series.

In The Way It Is Now, police officer Charlie Deravin, suspended and under investigation, has returned to his hometown beach community while awaiting to find out if he will be fired or still have a job.

While waiting, Charlie is biding his time by surfing and pondering his past and future, with his free time leading him to re-examine the disappearance of his mother Rose twenty years ago.

Charlie’s mother and father, Rhys, also a police officer, were in the middle of a divorce twenty years ago when his mother disappeared. Her abandoned vehicle was found near the beach with no trace of her left behind, leading many to suspect Charlie’s father was behind the disappearance. During this same period, as a young officer, Charlie was also investigating the disappearance of a young boy with the unresolved nature of that case haunting him ever since.

In sifting through available information regarding his missing mother, Charlie discovers areas of the investigation that were examined less than adequately by previous detectives. One area involves who he believes to have been a viable suspect named Shane Lambert. Lambert, with a less than stellar reputation, was a former tenant of Charlie’s mother and in Charlie’s eyes, was not fully vetted by the previous investigators, leaving too many questions unanswered.

When Charlie attempts to locate Lambert, he soon finds out not only has he seemed to have fallen off of the face of the earth, but there are those that seem to be impeding the discovery of his location.

With newly discovered evidence and because of advanced forensic science techniques allowing a renewed examination of previous evidence, Charlie continues his own off-the-books investigation, facing hostility from both older police officers and new investigators.

Along with the main plot, Disher includes simultaneous additional plot threads highlighting multiple characters that add to the tale.

Readers fond of police procedurals with well developed characters and regional environments should enjoy The Way It Is Now and are strongly encouraged to also seek out Disher’s other novels involving his Hal Challis and Paul Hirschhausen characters.

The Way it is Now available at:
Amazon