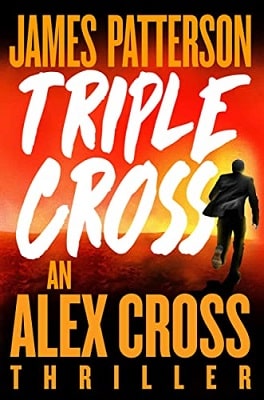 I have always been convinced that Alex Cross series is the best of James Patterson’s numerous creations—not the least because it is his own and not collaborated with anyone else—and Triple Cross, the thirtieth outing of the Psychologist crime-solver, reinforces my conviction yet again!

Dr. Alex Cross is no stranger to the handiworks of sick serial killers, whom he has been hunting throughout his long, illustrious career both inside and outside of law enforcement, but his latest case is unlike anything he has seen. The killer has committed three perfect crimes in little over a year so far, entering rich households in the DC area with utmost stealth, executing entire families—from the youngest of kids to the eldest of grandparents—in their sleep with cold, dispassionate precision, and making a clean exit as if into thin air. Alex and his friends from the Metro Police Department and the FBI can find nothing to connect the slaughters apart from the otherworldly skill of the perpetrator—whom the media has named ‘the Family Man’—and are almost praying for a miraculous slip-up from the killer. Adding to their frustration are Suzanne Liu and Thomas Tull—the former an editor with a big publishing house until recently and the latter a renowned true-crime author—hurling allegations against each other that they insist are connected to the case. Tull has previously written three bestselling books on serial killings—all lauded for their authentic insider information about the investigations—and wants to be involved in the investigation of the Family Man case, which is going to be the subject of his next. Liu has been Tull’s editor since beginning, and his lover for some time, but has been fired from her job for losing his upcoming book to a rival publisher.

Meanwhile, Bree Stone—Alex’s wife and former Chief of Detectives with the Metro PD, presently working for a private security firm—gets retained by a secretive client to investigate a fashion magnate whose wrongdoings might have resulted in more than one death. As she makes headway in her assignment, people connected to the case start to die violent deaths and Bree begins to feel like a mere tool in the hands of someone powerful, with a much deeper agenda. Never willing to be anybody’s tool, Bree decides to probe the matter on her own and unearths startling things, the most incredible of which is her case’s connection with that of Alex’s.

While husband and wife are fighting to solve their confounding mysteries, Alex’s long-time adversary, known only as ‘M’, makes his presence felt in his own disconcerting manner and his connection, if there is one, to their cases could make it all much more complicated.

Patterson has, over almost three decades, built a stellar cast of characters in this series and all he needs to do is concoct plots and situations to challenge those, which he does supremely well in Triple Cross. It is always a pleasure to reconnect with Alex and his friends and family, including the dream grandmother—Nana mama. The new characters, especially NYPD detective Rosella Salazar and fashion designer Phillip Henry Luster—both part of Bree’s story—are well-crafted too and deserve another appearance or two. As usual, Patterson seasons the thrilling tale with the delightful happenings in Alex’s family, from Nana mama’s delectable dinners to the exploits of Alex’s kids—this time the athletic prowess of his daughter Jannie.

The plot of Triple Cross has the right amount of suspense, mystery and action, but the ending—while entirely satisfactory—feels somewhat tame compared to the previous volume’s high-adrenaline clash set in the wilderness of Montana. In a welcome move, Patterson gives Bree a large share of the action that gets her close to death more than once, and I wish he keeps the trend going. It seems that Patterson has heeded the request of his fans, including me, to resolve the longstanding mystery of ‘M’, and Triple Cross has Alex getting close to the elusive, seemingly omniscient opponent.

Inevitably, there are a few points where the reader needs to suspend disbelief, particularly where the lead couple’s cases intersect. And, probably due to having two cases running simultaneously, the final reveal of the Family Man’s identity and the motive behind the chilling murders was not as impactful as I had expected. However, Patterson makes up for the shortcomings by closing Triple Cross on a nail-biting note with the exciting possibility of a face-off between M and Alex in the oncoming episode. Simple language, short chapters, crisp dialogues and vivid descriptions make Triple Cross a rapid, riveting read, and it is not to be missed by the fans of this splendid series and any other reader looking for all-round entertainment.

I am thankful to Random House UK, Cornerstone, for the e-ARC of Triple Cross, made available to me through NetGalley, in exchange for my unbiased review.