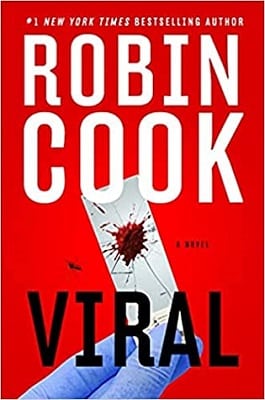 In Robin Cook’s latest novel, Viral, the Murphys – Brian, Emma and four-year-old Juliette – are enjoying a weeklong vacation in Cape Cod when Emma is bitten by a Tiger Mosquito. Days later, she is experiencing flu-like symptoms and is unable to get out of bed.

Brian quickly packs up their rental house to return to NYC. As they get close to their home in Inwood, Emma begins seizing and they head straight to the ER, where Emma falls into a coma.

As she is admitted, they diagnose her with Eastern Equine Encephalitis, a mosquito-borne viral disease caught during one of their beach excursions. While Emma remains in a coma, Brian is called to the business office of the hospital where he has been informed that his insurance company has denied the claim for Emma’s admittance into ER. As this book is titled Viral, it would lead the reader to believe the book is regarding a virus. However, the actual virus Emma succumbs to is only a small part of this novel. This book uncovers the predatory practices of the Health Insurance industry. Once Brian begins to fight his behemoth insurance company, he learns about all the policies and clauses of the plan he has signed on to, without reading. When young Juliette exhibits symptoms of EEE, Brian has already been put into collections by the hospital. He has no choice but to bring her to the same hospital ER, where he feels he is treated unfairly because of the debt owed.

Viral takes place during the Covid-19 pandemic, though it is only mentioned in terms of wearing masks and other safety protocols. The plot really concerns Brian’s health insurance battle and his fight to get the hospital to take care of his wife and child despite his debt. While Brian is a formidable character, he doesn’t seem to act in a way that one would expect him to considering his circumstances. Things happen in the book quickly, and he acts with little discussion or thoughts of grief. He seems almost paranoid in his attempt to force doctors to treat his daughter. While Robin Cook’s writing style is fantastic, the plot took a strange turn halfway through the book and it was admittedly hard to keep up. In Brian’s world, everyone was bad, including the Emergency room doctors. This is my first foray into a novel by Robin Cook. I was definitely expecting to read a certain type of novel, which was not the case. Despite this, the novel is well thought-out and the characters are interesting and relatable. It is also fast-paced and easy to read. I enjoyed it and am eager to read another of Cook’s novels.