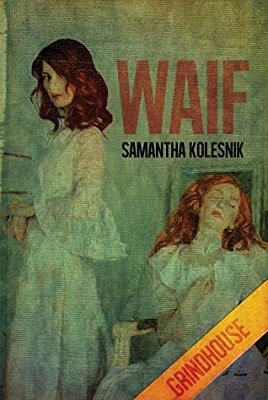 This is Samantha Kolesnik’s sophomore novella following her big 2020 hit, True Crime. Because of the success of True Crime and the nature of Kolesnik’s storytelling, Waif carries the burden of big expectations. Sometimes readers enjoy a debut so much, they unintentionally bring that loyalty into the second effort as a demand for more of the same.

Thankfully, Samantha Kolesnik elected to prove her aptitude for versatility. Waif is the story of a woman named Angela who has come to the end of her rope. After shedding tears in her parked car, she enters a grocery store and has an encounter with a stranger about marshmallows. This brief exchange is the catalyst for a whole series of events that ultimately changes Angela’s life.

Kolesnik expertly packs this slim offering with thought provoking insight into the mind of a woman pushed to her breaking point. Angela’s journey is messy and reckless. She makes contradictory decisions that fly in the face of what we, the audience in her head, know is self-destructive or unhealthy. But ultimately, it’s Angela’s path. The reader is an observer to the pull of obsession, toxicity in relationships, abuse, sexual awakening, and the insatiable hunger for love and acceptance. Angela has long since been deprived and feels undeserving; neglected. The horror is in how common Angela’s situation really is. The way the story explodes into utter chaos and depravity is obviously not an everyday kind of tale, but the way people’s lives can spiral out of control due to the loss of self, isn’t. A cautionary tale to those who have traded their identity for a life lived outside of who they are. It’s a scary feeling to realize a chain of mistakes can wind up binding you to unhappiness but this story, Waif, explores the idea that freedom can arise from unlikely situations or opportunities that can only be found if one is desperate enough to really look.

Waif is available at:
Amazon