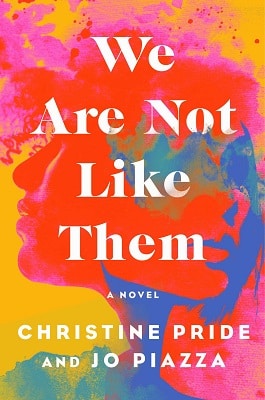 “Don’t walk in front of me… I may not follow

Don’t walk behind me… I may not lead

Walk beside me… just be my friend”

We Are Not Like Them is a novel about two best friends: Riley, a black woman and Jen, a white woman. Riley and Jen have been best friends since they were 5, when Jen was brought to Riley’s mother’s daycare. They are both living in Philadelphia now, close to their families. Riley’s career has taken a turn and now she is becoming a successful black female reporter while Jen, thanks to Riley’s loan, is finally pregnant through IVF with her police officer husband, Kevin. They are together at a bar one night when a news story breaks that an unarmed black teenager has been shot. They don’t know at that moment, but Jen’s husband is the one who shot him and their long friendship is put to the ultimate test.

A collaboration between a white author and black author writes this fast-paced and timely novel. We are Not Like Them is told from both points of view and that dual voice is necessary in this novel to understand how differently both see the same tragedy. For the first time in their 25-year friendship, race is now an issue. While it is Riley’s obligation as a reporter to cover this ground-breaking news story, Jen faces the prospect of her husband being imprisoned and also losing her best friend, who unsurprisingly is on the side of the teenager’s mother. Riley must side with the black community and cannot heed Jen’s calls for support in defense of her husband. She is especially bothered because Jen has appeared on TV stating she has a “black best friend”.

While Riley tries to see both sides, Jen’s inability to see where Riley is coming from bothers her. When she tries to explain how her life is different as a black woman, Jen cannot understand and it tears apart their friendship. Jen refuses to see “colors” but also does not understand why Riley will not come out in defense of Kevin.

Pride and Piazza’s novel is a story about friendship set with the backdrop of racism in the US and the trend of police shootings of unarmed black people. I found their relationship compelling but also heartbreaking. We are Not Like Them is an amazing and raw book with an exceptional authenticity to the dual voices that speak throughout. Being touted as one of the must-read books of the year, I found it riveting and informative.

We Are Not Like Them available at:
Amazon
Books-a-Million