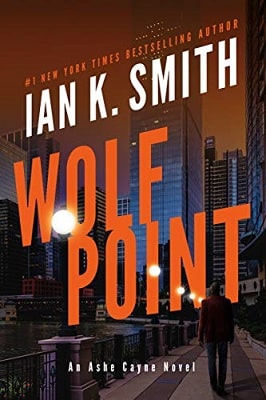 Ian K. Smith is back with another gritty investigative thriller where nothing is quite as it seems. Ashe Cayne knows the world of private investigating quite well and Smith has developed him into a strong character who is prepared to turn over every stone to get to the truth.

While the series is still coming into its own, the foundation is strong and sets Smith apart from many within the genre, which permits the reader to sit back and enjoy some stellar writing and suspenseful plot twists.

Corruption is rife on the streets of Chicago, something that private investigator Ashe Cayne knows all too well from his time on the CPD. When the adult children of prominent political figure Walter Griffin turn to Cayne, he’s not sure what he can do. Griffin was found dead in a seedier part of Chicago, but it was clearly a suicide. That said, neither of Griffin’s children believe that their father could have done this and implore Cayne to get to the truth.

Two years after the fact, Cayne must work extremely hard to cobble anything together, while also fighting against the suicide label. What he discovers not only refutes the official cause of death, but opens up new problems that could easily provide a list of suspects. Might it have been the Russians? A political figure Griffin wronged? Someone with a secret who wanted to ensure it never saw the light of day? Cayne is busy tracking down all the possibilities while trying to keep himself from being a new target.

While Ashe Cayne knows his city well, there’s something going on that even he could not have predicted. Nothing is coming together, leaving him to wonder if there’s a cover-up in place. Cayne owes it to Griffin’s family to find the truth, even if he ruffles a few feathers along the way.

I remember being highly impressed with Ian K. Smith’s series debut, feeling that the book took private investigation to a new level. This was not the hokey investigator looking into simple cases to appease an insistent family. Rather, Ashe Cayne dives headlong into the dark underbelly that is Chicago’s most dangerous neighborhoods, seeking answers that are likely best not revealed. The grit oozes from every page and Smith keeps the reader wanting to know more, particularly as new twists take the story in unforeseen directions.

Ashe Cayne continues to reveal himself throughout the story, adding a little more to his backstory while forging ahead with abandon. Well-known to some of the richer parts of the city, Cayne does not mind getting his hands dirty if it helps a client, especially one he trusts has been wronged. Surrounded by a number of strong characters who bring the streets of Chicago to life, Cayne is sure to be a memorable protagonist for as long as the series continues.

This was another strong effort by Smith, who has a way with words and description. The narrative moves swiftly and keeps the reader trying to match its pace, while never being truly predicable. Smith peppers the story with unique characters and plausible plot lines, all while developing an air of mystery until the final reveal. Ashe Cayne may know Chicago, but even he is sometimes surprised just how corrupt its politicians can be when trying to vie for ultimate control. This is a series worth noting, as Ian K. Smith has laid the groundwork for something spectacular, provided he continues with the effort he’s invested into these first two novels.

Kudos, Dr. Smith, for delivering yet again. Readers are sure to take note and see that the genre has a new master.