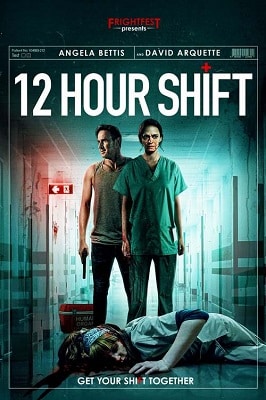 Who knew the shady goings-on at a third-rate Arkansas hospital would strike black-comedy gold?

In Brea Grant’s frenetic and scathing 12 Hour Shift, we spend a long day with Mandy (Angela Bettis in a tour de force), a harried, overworked nurse with a penchant for snorting crushed pain pills when the going gets tough. She and her quick-thinking supervisor Karen (Nikea Gamby-Turner) have a profitable side hustle going on, supplying the Dixie Mafia with fresh organs that would otherwise go to waste.

Despite her dangerous and illegal sideline, Mandy proves to be the most (only?) compassionate soul for miles, especially when compared to her blonde cousin Regina (Chloe Farnworth), an airhead sociopath who picks up the organs for burly crime boss Nick (wrestler Mick Foley).

Complications ensue when Regina stupidly misplaces a kidney prompting Nick to send violence-prone henchman Mikey (Dusty Warren) to fetch hers as a replacement. Stalling for time, Regina hightails it back to the hospital to find more organs, really fast.

How hard could it be?

At its best moments, 12 Hour Shift is an anarchic riot, held together by a righteous performance from Angela Bettis as Mandy. During her titular workday Mandy curses, threatens, flirts, pleads, freaks out, and commits gruesome acts, each requiring its own facial transformation. Bettis never misses a beat—her expressions and comic timing are never less than impeccable. Mandy stands tall as a complicated, resourceful woman with the enviable ability to compartmentalize her train wreck of a life.

Chloe Farnworth plays Regina as the dopiest loose cannon ever let loose in a hospital. After seducing a hapless skater boy and carving him up, Regina discovers the kidneys aren’t where she thought and ends up stealing the poor kid’s bladder.

“Why would you bring this cousin of yours into this if you knew she’d kill people and rat us out?” asks an exasperated Karen.

“I sometimes have too much faith in humanity,” Mandy answers.

The mercenary organ-legging operation merrily flips the script on the idea of medical professionals being selfless and saintly. Instead, the staff at this hospital spends its spare time hunting for spare parts out of dreadful economic necessity, rather like Vincent Price and Peter Lorre as incompetent undertakers in Comedy Of Terrors.

Between hair-raising scenes of bloodletting, Karen and Mandy find time to commiserate over crappy birthday cake in the break room and an annoying religious coworker.

Their mundane griping brings unexpected blue-collar verisimilitude to a zany plot about brutally invasive surgeries happening in the hospital corridors.

Writer-director Grant is up to the task. She bakes up inventive, idiosyncratic characters that would be right at home in a Coen Brothers universe, while her opera-driven fight sequences jump like Tarantino on too much coffee.

12 Hour Shift is a freewheeling spectacle that oscillates between gross and quirky, accompanied by superb acting and quotable dialogue. As someone once said about a different film, it’s a cult movie in need of a cult.

True, it does require some adjustment on the part of the audience to root for a drug-addled organ trafficker, but by the time the end credits roll, it will be done.