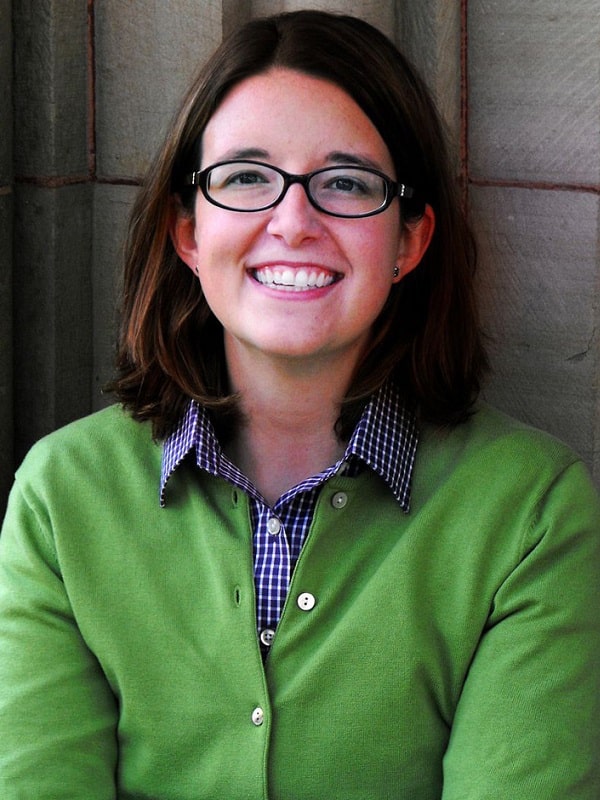 Amanda Flower is a USA Today bestselling and Agatha Award-winning author of over thirty-five mystery novels. Her novels have received starred reviews from Library Journal, Publishers Weekly, and Romantic Times, and she had been featured in USA Today, First for Women, and Woman’s World. She currently writes for Penguin-Random House (Berkley), Kensington, Hallmark Publishing, Crooked Lane Books, and Sourcebooks. In addition to being a writer, she was a librarian for fifteen years. Today, Flower and her husband own a farm and recording studio, and they live in Northeast Ohio with their two adorable cats.

Q. How did you come up with the idea for this story?

Amanda Flower: There has been so many murders in Harvest. Because both series are doing well there will be more killings. I wanted a cold case. It works out for it to be in the Matchmaker series because Lois and Millie are in their sixties, which means they would have been around forty years ago as adults, when the murder took place. I also want to build a case around an Amish restaurant.

Q. Is there an Amish Corner Beach restaurant for real?

Amanda: No, but it was based on those Amish restaurants with big buffets. Buses come in with tourists to get big family size meals. It is like Thanksgiving every single day. There must be at least ten restaurants that all look the same and serve the same food.

Q. Why did you put in the Amish proverb at the beginning of the book?

Amanda: You are referring to this one, “A house is made of walls and beams; a home is made of love and dreams.” The crime that happened is really based upon spousal abuse. It is usually very hushed. I did not want to ignore it as a problem. I used this quote because the victim had a house, but it was not a real home for her since it was not a loving place. I just made the connection of the Barbra Streisand song, “A House is Not a Home.”

Q. The animal stars of this series are the goats, Phillip, and Peter. Do you have goats?

Amanda: No, but we do want them eventually. We are going to do chickens first. One of my neighbors told me chickens are like a gateway animal. They are more low maintenance than goats. Millie’s nephews and the goats always are a good addition to the story.

Q. Is it true that Uriah and Millie are no longer an item?

Amanda: He is uncertain of Millie’s feelings. His mission to come back to Holmes County was to find out what happened to his sister. This has tortured him for the last forty years, not knowing what happened to her. He really cares about Millie, but his emotions are preoccupied by his missing sister. In the next book, he has returned home to Indiana. He was very dedicated to his sister, and realizes Millie is still in love with the memory of Kip, her late husband.

Amanda: He was steadfast and traditional Amish. They loved each other deeply. He was a kind and loving husband. She is not over him.  Millie commented in this book, she does not know what he would think of her life now. She and Lois are chasing murderers and she is not leading a traditional Amish life.

Q. Was there abuse?

Amanda: Samuel, the abusing husband, and his wife, Galilee were never in love. Theirs was a marriage of convenience. Most Amish marry for love, but land and property were sometimes considered. If a man wants something monetary, they will marry for that reason. He did not love her and emotionally/physically abused her.

Q. Is it true that the bishop has an oversized say in someone’s marriage?

Amanda: Yes. This is one of the hard things for a non-Amish person to wrap their head around. He is basically the law in the district and what he decides must be followed. He is essentially chosen by G-d to lead the Church and the community. It makes it difficult for anyone to leave, because they will be excommunicated, which means they must be “shunned” by everyone including their family. In this book, I had the current Bishop remove a wife if there is even a rumor of abuse. He is compassionate and understanding to the wife’s struggles.

Q. What is the role of the sheriff?

Amanda: He is unkind and evil. He does not respect the Amish, considers them in a bad light, and has his judgement colored. He stays in this position of power because no one challenges him in an election. Sheriff Marshall has a lot of say with other law enforcement agencies in the state of Ohio. Eventually Aiden will challenge him in a future book.

Q. How about the role of baseball?

Amanda: The Amish will play baseball. Millie’s nephew, Micah, learned about baseball from an English boy who is his classmate. He taught Micah about collecting baseball cards. Micah is fascinated with this hobby because he loves playing baseball. Micah hides collecting baseball cards because there are pictures of the players on the cards. Remember the Amish do not have faces on dolls and never take photographs, or have pictures of their family, for that reason.

Q. How would you describe the victim, Galilee?

Amanda: Frightened. When she was working at the restaurant, she was more herself and enjoyed being away from her husband. Overall, timid and scared of her husband Samuel. She is kind and joyful at work, but at home she is closed off.

Amanda: The final book in the “Magical Mysteries Series” comes out in January 2022, titled Crimes and Covers. There is a murder outside a wedding tent. In February 2022 Put Out to Pasture, the farm series comes out. In March 2022 Frozen Detective will come out by Hallmark. It has a murder happening at a posh New Year’s Eve party at a ski resort. The murder weapon is a bow and arrow. Peanut Butter Panic, the “Amish Candy Shop Mystery Series” comes out in May or June 2022. It is set in Thanksgiving. The busybody, Margot, has her mother coming to Harvest with her new husband, someone very much younger than her. At dinner he drops dead from a peanut allergy. In July 2022 my first historical mystery comes out. It is set in 1855 with the sleuths Emily Dickerson and her maid. The “Amish Matchmaker Series” featuring Millie will be out this time next year. It is titled Honeymoon’s Can Be Hazardous. Lois’ ex-husband comes to Amish country with his new wife. The next day his wife dies, and Lois is the prime suspect. There will be an issue of drug trafficking.

Marriage Can Be Mischief is a cozy mystery in the small town of Harvest Ohio. It features Amish quilting matchmaker crime solver Millie Fisher and her English friend Lois Henry.

This installment has Millie’s childhood friend, Uriah Schrock, returning to Harvest to find out what happened to his sister, Galilee. Forty years ago, her abusive husband Samuel was found dead, and she has disappeared. But now a film crew doing a documentary on this cold case find a human skull and bones. After a DNA test the skeleton is found to be Galilee. The Sheriff who dislikes the Amish quickly determines that there is no new evidence to reopen the case and rules that she had killed her husband. But Millie realizes things do not add up and she agrees to find out the truth.

Always present to help Millie is her best friend, Lois. They are as opposite as can be. Millie is a widow who still mourns her late husband, while Lois is a three-time divorcee. Millie is reserved and Lois is flamboyant. Lois has purple/black spiked hair and Millie dresses in her Amish clothes. Even with these differences they are inseparable except for going to Church. Both spend their spare time trying to solve the murders in Harvest. Now they are trying to clear Galilee’s name and prove that someone else committed the murder. But it could be costly since the killer will do anything to make sure Lois and Millie are stopped.

Per usual, Amanda Flower does not disappoint. She consistently has likeable characters, charming settings, and engaging mysteries with plenty of humor to go around. 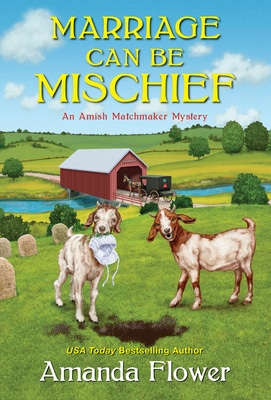 Marriage Can Be Mischief

Millie Fisher may be widowed, but she leads a full life in her Amish hometown of Harvest, Ohio. There’s her quilting circle, her Boer goats, her gift for matchmaking—and the occasional murder . . .

Millie is happy that her childhood friend, Uriah Schrock, has returned to Harvest after decades away. He was sweet on Millie in their school days, but she only had eyes for her future husband. Now, there’s a new spark between them, so Millie is concerned when Uriah doesn’t show up at the Harvest concert series—or for his job as the Village square’s groundskeeper. Perhaps Millie has been involved in too many murder investigations, but she has a sinking feeling. And when she and her best friend, Lois, find Uriah with the police, it seems she’s right . . .

A film crew is in Harvest to make a movie about a forty-year-old unsolved murder. A skeleton has been found at the bottom of a ravine—and Uriah is certain it’s his sister, Galilee. Right before Uriah left Ohio, she disappeared, and her harsh husband, Samuel, was found fatally stabbed with a knitting needle. The sheriff declared that Galilee killed him and ran away. Uriah never believed the theory, and he’s come back to Harvest hoping, Gott willing, Millie will help him stitch together the truth.