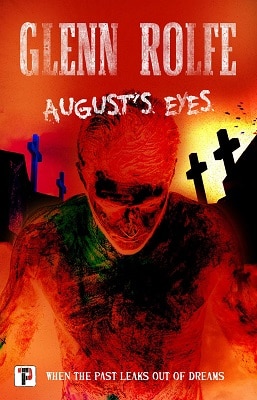 John is having reoccurring nightmares about a graveyard and two mysterious young boys that hang out there. After analyzing these disturbing dreams, he discovers an unsettling truth buried within his subconscious mind.

Now time begins ticking for not only himself, but for those he cares for. As the spirits existing among the cemetery graves grow more and more restless, a sense of urgency takes precedence over all else.

Author Glenn Rolfe conceives an unspeakable story centered around a modest town possessing several dark secrets hidden in its past. Particularly the local cemetery, also known as Graveyard Land, carries buried perplexities that are chained to a monstrous evil known as The Ghoul of Wisconsin.

Kidnapping, rape, and murder. This monstrosity appears in the form of a serial killer driven by compulsive addiction and perversion. His appetite for young boys is a true crime nightmare lifted straight from the twisted mind of Glenn Rolfe. Witnessing a serial murder rob young victims of their innocence can be stomach churning at times. Shrouded in a world of predators that manipulate for selfish gain only, August’s Eyes follows the footsteps of a murderer comparable to the likes of Bundy, Dahmer and Gacy.

Rolfe creates a timeline within his book that not only straddles reality and the spiritual world, but includes the past and present as well. This allows several gateways for the reader to explore and gain entrance to uncensored shadowy corners.

Music references are an enjoyable factor throughout the book that enhances the mood and timelines. It presents the atmosphere as well as descriptive scenery and scenarios. Fog shrouded grave markers, the phobias of entrapment and creepy crawlies that funnel out from the darkness… all of these bring the nightmarish ambiance that is needed to enhance the frame of mind.

As in true crime, there always seems to be a morbid fascination and curiosity of heinous acts of violence committed by perpetrators. Seeing the evil within Rolfe’s creation is guaranteed to make hairs stand on the back of your neck and ring the stranger danger alarm at full volume. He has pieced together something special for those who love a good thriller/horror book with plenty of “holy crap” moments. August’s Eyes delivers in a relentless, unforgiving manner, proving the author pens his work without kid gloves and no apologies. If you have children of your own, be prepared for a parent’s worst nightmare.