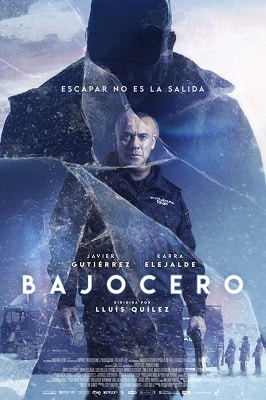 Below Zero is a 2021 Spanish crime thriller, directed by Lluís Quílez, about a police escort van that is attacked. As a result, an officer faces off against three things simultaneously: the inmates he was transferring, the person who intercepted the vehicle, and the vicious cold that could freeze everyone to death.

The film opens exceptionally, with a mysterious figure torturing someone for the location of a body. But when the torturer is unable to extract the desired information, he buries the other person alive. Viewers are immediately glued to the screen. Afterward, we’re introduced to our main character, Martín, as he is changing a tire on his car with his daughter in the back seat. He’s shown as law-abiding, and believes in his role as a police officer, and in upholding the law while assisting everyone—even criminals.

Below Zero does not give viewers anything new in the genre of action, or prisoner transport, but instead it leans into an adapted storyline that generates multiple questions for the viewers as the story unfolds to an inevitable conclusion. But for us to continue being interested in the film, we are given two things to hold onto throughout: the visuals and the compelling character of Martín.

The transport van which moves the prisoners is a source of visual comparison repeatedly in the film thanks to the division between the cockpit and the location of the criminals. As the story begins to unfold, we end up with effectively a story told in both locations, despite them geographically being in close proximity they continually feel like they are separate in time and space. As we hurtle towards the conclusion, it is easy to get lost and begin to forget how close they are to begin with.

Then with the lead Martín, we are shown someone who is very much in line with his morals, and became an officer due the obligation he has in protecting people. This is an evolving human, who is willing to adapt to the circumstances he finds himself in, using his moral compass as a guiding map, that remains fluid. When he witnesses what he believes to be an abuse of power, he calls it out, he tries to keep everyone in his care alive for as long as possible, and is willing to listen to all sides of a story. This is what makes him such a compelling person to watch. He is willing to examine evidence before a final decision, poses questions, and is willing to be wrong. Overall, I would watch this film again, despite knowing the ending, just to see the cogs in Martín’s head spin.