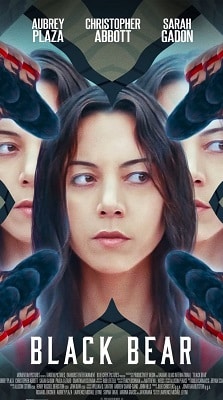 Wildly unique and outright entertaining, Lawrence Michael Levine’s Black Bear is a film that’s hard to describe, but easy to recommend. What we ultimately get is a movie of two distinct chapters (appropriately named Part 1 and Part 2), with the main cast of actors playing a varied version of their characters in each section, while remaining in the same setting. Confused? Well, that might be the point, as Levine is more or less giving us an exploration of the often-confounding creative process – with all the blurred lines we can handle.

And while the first half is fairly straightforward with an easily digestible narrative about a young actress joining a couple at their lakeside rental property, the second part proves a little more ambitious. Shifting to a “movie within a movie” scenario, it admittedly becomes a little too “showbiz insider” (and that’s coming from a film critic). But, regardless of the slight audience disconnect, it always remains a captivating watch. Your brain will surely be working overtime to put the mysterious puzzle pieces together, especially when that titular black bear rears his ugly head. Just don’t expect the answers to get spelled out though, as this is about as ambiguous of a journey as they come. It’s arthouse suspense and intrigue alright, but with a darkly fun approach.

Black Bear’s key ingredient, however, is without question its cast. And while the equally great Sarah Gadon and Christopher Abbott deliver expertly nuanced performances in each of their altered outings, it’s Aubrey Plaza who serves as the biggest revelation. Playing the millennial film starlet, Allison, Plaza commands the screen at every turn with a smart and sexy edge. And with the actress best known for her deadpan comedic stylings thanks in part to her role on NBC’s Parks and Recreation and films like Mike and Dave Need Wedding Dates, she’s bound to surprise audiences in a big way here. If there is any justice in Hollywood, we’ll get more dramatic leading turns from the star in the very near future. One can hope, anyways.

So, with all its narrative risks, first-rate acting, and meta surprises, Black Bear adds up to one hell of a twisted love letter to indie filmmaking. Will it be for everyone? No. But, for those looking for a provocative mind-bender with their dramatic thrillers, well, this is a must watch. And if you’re anything like this reviewer, be prepared to mull over the proceedings for the days and weeks that follow.