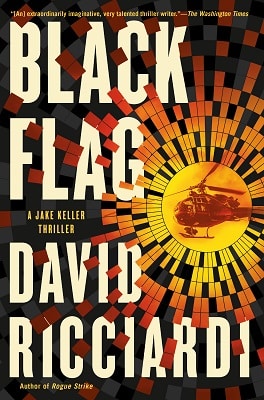 With the ARC for the latest novel in this series waiting for me, I am thoroughly enjoying this David Ricciardi collection.  Exploring yet another international political theme with which I am not all that familiar, Ricciardi takes the reader on a wonderful adventure that never stops building steam throughout.

Jake Keller continues to make a great name for himself within the CIA and has been tasked with working on a case of international kidnapping on the high seas. While pirates have often been a part of lore, it would seem that the region around Somalia is rife with those who will stop at nothing to attack ships and pillage anything they can. Keller will not only have to be quick about it, but will have to prove just how wily he can be, connecting with a warlord to set a trap. His cunning will be tested at every turn, as well as his safety, in a region of the world where questions tend to bog down progress.  All that before Keller learns of another horror that awaits the Somali people, unless it can be neutralized. Ricciardi proves masterful again in this third novel of the series, leaving me ready to tackle the ARC and add to the buzz!

While there are many stories about pirates flying the Jolly Roger on the high seas, pillaging and taking whatever they like, the 21st century has seen the rise of a new type of criminal. No longer is it riches and gold, with people walking the plank. Now, the world of high seas piracy is focused on targeted specific ships weeks before they leave port, confiscating things when no one expects it, then causing both the vessel and crew to disappear. This stealthy activity has created much concern amongst the international shipping community, sending panic and queries in all directions.

While the focal point of the piracy appears to be in and around Somalia, no one has been able to catch the specific pirates at their game. Still, rumors emerge that there are many who are basking in riches and using teams to target ships in such a way that they are done before anyone notices the ships have gone missing. While an international issue, few countries are prepared to act, worried about how to broach the subject or what force they can exert without causing an international incident.

Enter Jake Keller, who is a highly trained CIA operative who appears to fear very little. Keller is prepared to travel to the heart of Africa to investigate, hoping to get the answers his superiors need. However, being as white as the driven snow makes it a little harder for him to work effectively in the region, forcing Keller to work alongside another operative who has an equal dose of passion in his veins.

Keller must not only find the correct warlord who has been orchestrating these attacks, but determine a future plan to ensure they are captured. This will require all the grit he has, as Keller poses as an investor and eventually tries to get onto the team of Somalia’s most feared pirate, a man who cares little for anyone else and has the scars to prove it. Knowing which ship will be targeted will help ensure he’s ready for the attack and can plan accordingly.

All that being said, Keller is not wanting to go into this completely blindsided, which leads him to strike up a connection with a Greek shipping magnate, with a vessel that might be perfect for targeting. Keller will have to keep both sides in the dark about his plans and work effectively to push them closer together, all while trying to synthesize his feelings about the heiress to the shipping fortune, who appears to fancy him.

There is sure to be blood in the water either way, but Keller must do all he can to stop the piracy and ensure international ships are safe as they traverse open bodies of water. The only way that will occur is by striking to neutralize the largest fish in the proverbial sea. This will take grit, gumption, and even a bit of patience. Keller has them all, but time is not a commodity that is plentiful at the moment. Is he willing to risk his connection to a wonderful woman by setting a trap?

All the while, Keller learns of something worse than pillaging on the open waters. One warlord will use the bounty he has collected to turn it on his own people, leaving the country even more devastated than before. Yaxaas is a truly evil man, as Jake Keller has come to notice from afar. However, it will take a calculated attack to neutralize the man and his mission before it’s too late. Working to bring this all to fruition, Keller learns that not everyone around him can be trusted. Will he have time to do all that must be completed before the Somali people are victims of another atrocious event? Only time will truly tell! Ricciardi proves that he is at the top of his game with this piece and I am eager to see what’s next.

I enjoyed so much about this novel, from well-crafted chapters through to the unique international content about which I know nothing. David Ricciardi presents his writing like no other in the genre and the reader is easily kept on their toes throughout. Ricciardi one to watch, able to stand next to some of the greats in the genre. He knows action, thrills, and political fallout, conveying it with ease to the curious reader.

Jake Keller remains strong throughout this piece, returning to being the key actor in the story’s success. Keller emerges with his usual grit and determination, always looking to overcome the obstacles put before him. While he is keen to get into the thick of things, there is another side to the man, one that does not usually surface when he is handling weapons or killing those who would bring harm to the masses. Ricciardi takes the time to show the softer side of Jake Keller in this piece, one in which loss fuels something else inside of him. This other side balances nicely throughout this piece, adding a spark to Keller and making him want to do what he can to help those in need.

The cast of supporting characters proved just as stunning as in the past two novels. There is an obvious focus on the African continent in much of the story, with a push towards Somalia. The country, its people, as well as the customs they possess, all come to the forefront here. However, that is not all, as Ricciardi spends a lot of time educating the reader about the shipping business and where power in that industry can be found. Those who find themselves as parts of the story help to enrich it, some complementing Jake Keller, while others serve as needed roadblocks to advance the plot effectively.

The story was, again, quite strong, and offered a unique perspective. While many in the genre use an apparent recipe for their pieces, Ricciardi tends to offer unique approaches to advance a complex story and keep the reader enthused. I had no issue with being fully attentive to what was going on and can only expect more of the same moving forward. There were more plots that focused on international politics, at least on the high seas, but the added bonus was exploring Somalia and how it has become a vacuum, leaving power brokers on both sides of the law to fill the void. Ricciardi engages the reader throughout, making them feel as though they are right there, in the middle of the action at key moments. Short chapters help push the momentum along and the writing is strong, offering a narrative that flows with ease. Balancing the personal side of Keller with some of the things he is facing made the story resonate even more for me. With the ARC ready, I will delve in to see what David Ricciardi has in store for Jake Keller and what amusements await me as well.

Kudos, Mr. Ricciardi, for another great addition to the series. I can only hope others will soon find your work and bask in the excitement it brings.