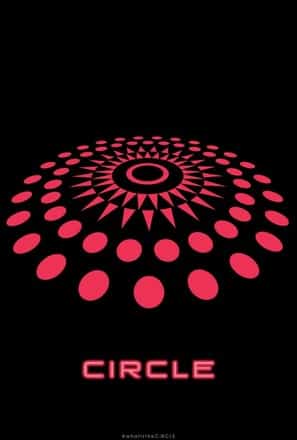 Circle is a 2015 American sci-fi psychological thriller that addresses social, political, race and economic issues that are currently prevalent across societies. The film has a fifty-person ensemble cast, which, for the most part, are all unknown actors who wake up and find themselves in a room, with one of them dying every two minutes or when they try to leave their zone. But they are able to choose who dies next.

After this realization sets in, blocs begin to appear based on personal values, which cause the viewer to begin a period of self-reflection to see how they would react in a similar situation. Circle is a great extension of society, making it a film that is timeless. By having the group involved be representative of society at large, there is a creation of a microscopic version of reality. It is revealed that the group were beamed into ships that are believed to be alien, and the group bicker over what they could be doing in the ship and why they are there. They theorize it is in relation to the human condition and how we all value our lives versus the lives of those around us. This leads to an interesting film, and many questions about society at large.

Initially, the young are shown to be ageist and targeting the old as they would be next to die anyway. While this is wrong, many side with them, killing the over 70s. As the group begins to get whittled down, we see the minorities disappearing first, after a Mexican man is killed due to domestic violence allegations, we have a black man call out everyone for being racist. Which in turn, leads to a rant from a cop about how everything is handed to the black people, and he is voted off.

Circle was inspired by 12 Angry Men, and takes place in a single area for the entirety of the movie. The film demonstrates the best and worst traits of humanity, and I don’t think it can be questioned that all of this can be observed in a group as small as fifty. There are questions about racism, income inequality, how important our jobs are to our identity, and more. This film will do nothing but cause you to think about how you would act in a similar situation, and perhaps any underlying bias that you may have could come to the fore.