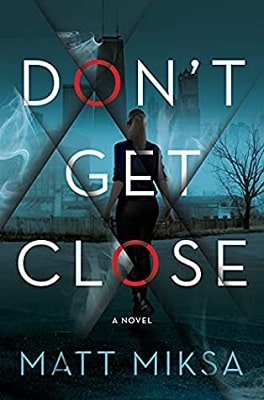 When handed this novel by Matt Miksa, I was not sure what to expect. Having never read the author, I entered this experience blind and ready for most anything. Miksa pens a decent novel with gripping storylines, sure to impress some readers as they learn a little more.

When a ruthless cult re-emerges on the scene after a bombing, a new FBI agent is forced to piece things together, both about the case that the group as a whole. All the while, she hopes not to get sucked in as she discovers more about those responsible for significant harm. Miksa does well with this piece, proving he can weave a great tale for all those who are interested.

After leaving her lifelong dream of being an artist, FBI Special Agent Vera Taggart is beginning to wonder if she made the right choice. She has an unusual knack when it comes to working crime scenes, but this has not enamored her to many within the Bureau. Taggart’s given the major assignment of investigating a set of bombings from years ago, hoping that a fresh look will provide new leads. Taggart combs through the evidence as it related to the Sons of Elijah, a cult with a penchant for suicide bombings. The Sons believe that they have special powers, having been reborn numerous times over the centuries. However, there’s something about them that has Special Agent Taggart curious and wanting to know more.

After a bomb destroys a Chicago restaurant, Special Agent Taggart knows the Sons of Elijah are back, ready to cause new pain to anyone around them. It’s then that Dr. Seth Jacobson becomes a key to the investigation. Dr. Jscobson is a renowned psychiatrist whose work with hypnotherapy has helped people tap into their past lives. Having had two of the Sons as patients before they began their bloody rampages, Taggart hopes that she can use Dr. Jacobson’s knowledge as a key to the investigation and open up new avenues to assist her. This soon drifts into sessions of her own, where new truths emerge that rock Taggart to the core, while forcing her to question how well she knows herself after all. Miksa spins quite the tale here and leaves the reader much to contemplate.

It’s always tough to discover new authors, unsure if they will mesh with your style of reading or sense of adventure. Matt Miksa did well, showing that he has a great deal of promise with this novel. The premise of the book was strong and he used some interesting angles to prove his points, though there were times that I was not entirely sold on the final product. I enjoyed the book, but was not as enthralled as I might have hoped, based on the premise. Still, there is surely something in here for many, particularly those who enjoy thrillers that push a psychological angle at various points.

Special Agent Vera Taggart does well as a protagonist in the piece, offering up some of her backstory and developing well as the story moves along. She shows a penchant for wanting to impress, while also fighting against the current throughout the novel, something that is addressed in the early stages. As she becomes enthralled with her investigation, pieces of her past and present emerge and keep the reader curious until the final pages, when much is revealed. There is something about her that leaves the reader to want to know more, though this is surely something Miksa will have to decide in his upcoming writing projects.

A story that mixes past with present, crime fiction with psychological exploration, and a peppering of self-discovery is sure to have a great deal of success, which Matt Miksa hopes to have created here. He’s done well and keeps the reader curious as the story progresses. A decent narrative flows well and allows the reader to enjoy the journey. Chapters speed along, some swift and teasers, while others delve deeper into the story. I usually enjoy cults and how they work, as well as a good crime thriller. This piece had both, but seemed to have missed something to pull me into the middle of the story and not get enough. Perhaps it was me, but i will leave it to other readers to see how they felt, rather than pass sole judgment on the final product.

Kudos, Mr. Miksa, for piquing my interest. I am eager to see what you have planned next!

Don't Get Close available at:
Amazon