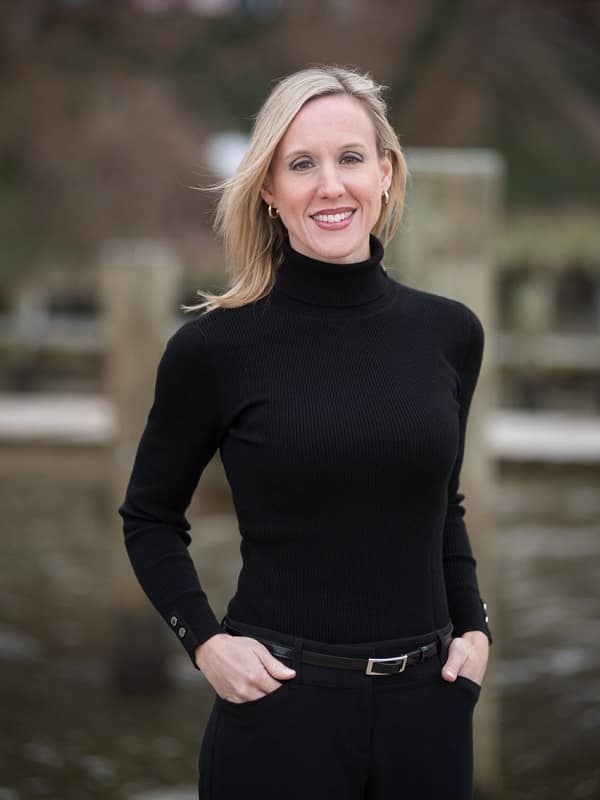 Erika Robuck is the national bestselling author of Sisters of Night and Fog, The Invisible Woman, Hemingway’s Girl, Call Me Zelda, Fallen Beauty, The House of Hawthorne, and Receive Me Falling. She is a contributor to the anthology Grand Central: Postwar Stories of Love and Reunion, and to the Writer’s Digest Essay Collection, Author in Progress.

Q How did you come up with the series idea?

Erika: Both these books are related. They are about women of WWII who fought with the resistance and participated in espionage in different capacities. As I was researching The Invisible Woman it led to the second book, Sisters of Night and Fog. I had been writing about women in the shadows of male authors for a long time. An editor said, why not write about a woman remarkable on her own. I discovered a Smithsonian article about a woman who spied for the allies and helped the foundation for modern intelligence. The main character of the first novel, Virginia Hall, fit the bill for a woman who is remarkable.

Erika: LOL. The name likes me. They are old-fashioned. It seems everyone I search is either a Virginia, Violette, or a Vera.

Q Ok, so do you like women characters whose names start with “V”?

Erika: I have grown to like it because I think of the victory symbols. It is fitting for these real women.

Q Is it true that the main character of Virginia Hall from The Invisible Woman was formulated from stories told to you by her niece?

Erika: I met her because she lives in Maryland, as do I. I was able to interview her quite a bit. She allowed me to see the family photos. She colored in the pencil sketch I had, able to get to know the real woman after I met her family. Virginia would take her niece on fishing and hunting expeditions.

Q How would you describe Virginia Hall?

Erika: She is unconventional in that she and her husband Paul lived together before they were married at a time when that was unusual. She is assertive, formidable, inquisitive, intelligent, no nonsense, has a sense of loyalty/duty, and incredibly courageous. She was athletic, the captain of every team she was on. Since being told no a lot of her life, she was a little bit bitter. Her mother did not want her to travel the world, the Foreign Service said no because she was a woman and had a disability. But she overcame all of it.

Q What was her disability?

Erika: She had a prosthetic leg. She accidentally shot off her foot while hunting, shooting birds. She named the leg Cuthbert, the Patron Saint of Birds. This is the only connection anyone could make with the name of her leg. Even with her loss of leg she had so many skills as an actress, hunter, sailor, adventurer, soldier, and linguist.

Q How did Virginia Hall become a spy?

Erika: After France fell to the Nazis she went to London. This is where she got on the radar of the British Special Operations Executive. They saw her talents and were not put off about anything with her. After her first mission where the network was betrayed, she had a tremendous amount of anger. She lost a lot of people to death and imprisonment although she was able to escape. With her next mission to France, she had a lot of survivor’s guilt and PTSD. She was afraid about losing people, yet she kept going, conquering it, and had hope. I am working with the women of the intelligence agencies and her family to get her The Medal of Honor.

Q Did she become a commander in the resistance movement?

Q How would you describe Vera Atkins (from both books)?

Erika: She was the ultimate spymaster, cool and calm. Being Jewish, Vera was deeply invested with those she supervised for the SOE to help fight the Nazis. She faced backlash as a woman but was able to recruit allies since she was incredibly charming and diplomatic. She could navigate the different circles. She and Winston Churchill were on the same page, not afraid to have women or people with disabilities serve. They were partnered with the OSS, the CIA precursor. The author Ian Fleming based the fictional character “M” on Atkins in his James Bond novels. After the war she hunted down every bit of evidence of those she agents lost, feeling deeply responsible. She lost 118 of the 400 she recruited. Her research was used in the Nuremberg Trials to convict many Nazis.

Q In Sisters of Night and Fog there was also a Virginia: Virginia d’ Albert Lake. How did they differ?

Erika: She is very different than Virginia Hall because she was a typical run of the mill woman. She did not seek danger and daring, thinking after she was married in France there would be a happily ever after. She was not wired for a leadership role but grew into it. Virginia d’ Albert Lake was more grounded and quieter. She embraced her role, helping one person at a time. She was a different kind of leader than Virginia Hall who could be kind of boorish.

Q What about Violette, another hero of the second book?

Erika: She is more hotheaded and impulsive than either Virginia. She worked more on instinct. She grew up with five brothers and had to fight her way through life. After the Nazis killed her husband during the war, she sought vengeance. Violette became a sharpshooter. She was more of a risk-taker, a wounded person, and more emotional than the other two. She moved through life like a wrecking ball. Her relationship with her father created in her wanting to be one of the boys and seeking the approval of the men in the resistance. She matured through the years of the war. With her SOE training she became more focused, subdued, and polished. This allowed her to be a great leader of those women who were imprisoned by the Nazis with her at Ravensbruck Concentration Camp.

Q What did all three women have in common?

Erika: Both Virginias were American. All three were courageous with an inner strength. They demanded respect. They found their vocation, which helped them rise to different occasions. All of them faced a cycle of emotions from worry, fear, hope, guilt, and love. They knew the average life span was six weeks. I loved them all with a different piece of my heart.

Q Can you tell us about the quote in one of the books, about humanity?

Erika: You are referring to this one, “Is humanity doomed? Is it even redeemable at this point? What’s the use of doing any small act of good when evil seems to overpower it? The darkness seems to blot out all the light.” What the Germans did to the Jews: rounding them up, sending them to labor and concentration camps, endless killings, and torture. Man’s inhumanity to man is incomprehensible. The Nazis also crucified babies, locked the French up in Churches, and burned them. Each of these women were determined to show that hope exists with the defeat of the Nazis.

Q What would you like readers to take away from the books?

Erika: There is always hope. Women have the strength to do what is needed to be done. They just must have courage. At the end of each book, they can read the author’s note if they choose to go deeper into the history.

Erika: I was thinking of writing about Vera Atkins, the supervisor of SOE but another author is doing it, Laura Kamoie. After this WWII novel I will go into another area of historical fiction. For my personal mental health, I am steering clear of WWII.

The Invisible Woman and Sisters of Night and Fog by Erika Robuck are very riveting historical novels. Based very closely on true stories, Robuck skillfully brings to life these heroic women, Virginia Hall, Virginia d’Albert-Lake, and Violette Szabo. Both these novels highlight the duty, sacrifice, and determination of these historic women who helped the Resistance in WWII.

The SOE, known as The Special Operations Executive, was a British WWII organization formed in 1940. They aided the Resistance with espionage and sabotage against the Nazis. They worked hand-in-hand with the US OSS, later to become the CIA. Both Winston Churchill, William J. Donovan, and Vera Atkins, who recruited, trained, and planned secret missions in France, aided the Resistance.

The Invisible Woman shows why Virginia Hall should be honored with the US Medal of Honor. She was a vigilant spy, a fearless soldier, and an unflinching commander. Sent to occupied France to organize spy networks, gather intelligence, and run safehouses in 1942, she had to escape the Nazis after her network was betrayed. But not to be deterred, she came back in 1944 to organize the resistance before the Allied invasion. The Gestapo had wanted posters of “The Limping Lady”, because she had a prosthetic leg who she named “Cuthbert.” She was influential in helping the allies to defeat the Nazis and liberate the French.

Sisters of Night and Fog has two women, Violette Szabo and Virginia d’Albert-Lake connected by fate and chance. Virginia is an American to a Frenchman who becomes a leader in helping Allied airmen escape from Occupied France. Violette, a British citizen who is half French, joins the SOE, leaving behind her small daughter, and parachutes into France with money to pay the resistance. Both women helped the resistance, but unfortunately their clandestine deeds come to a staggering halt after they are captured by the Germans and brought together at the Ravensbrück concentration camp. They bond through having to endure the torture and horrific conditions. Virginia admires and respects Violette for her inspiration and determination to keep as many women as possible in the camp alive.

Robuck’s portraits of these three unforgettable heroines is captivating. A bonus in both novels is the author’s notes about the characters and history. Readers will feel the tension and take the journey with these inspiring women through their sacrifices, courage, and endurance. 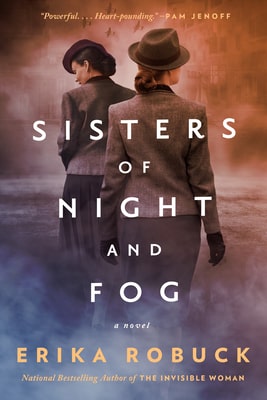 Sisters of Night and Fog

1940. In a world newly burning with war, and in spite of her American family’s wishes, Virginia decides to stay in occupied France with her French husband. She’s sure that if they keep their heads down they’ll make it through. But as the call to resist the enemy grows around her, Virginia must decide if she’s willing to risk everything to help those in need.

Nineteen-year-old Violette is a crack shot with an unquenchable spirit of adventure, and she’s desperate to fight the Nazis however she can. When her mother sends her to find an exiled soldier, Violette meets the man who will change her life. Then tragedy strikes, and Britain’s clandestine war organization—the Special Operations Executive—learns of Violette’s dual citizenship and adept firearm handling and starts to recruit her. But Violette is no stranger to loss and must decide whether the cost of defiance is too great a price to pay.

Set across the European theater of WWII, Sisters of Night and Fog tells the story of two women whose clandestine deeds come to a staggering halt when they are brought together at Ravensbrück concentration camp.