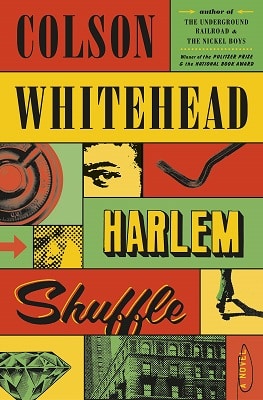 Colson Whitehead never writes the same book twice. He jumps genres and styles with every new release. From the post-apocalyptic Zone One to the magical realism of Underground Railroad to historical fiction of The Nickel Boys to a nonfiction book where he enters the World Series of Poker in Las Vegas with $10,000 (The Noble Hustle). There is no predicting what he will write next. The only constant is his work. Everything he does, Colson Whitehead does well.

Whitehead’s latest book, Harlem Shuffle, brings him into the realm of crime fiction. This is structured like a triptych, three sections, each section almost the same length, each section two to three years apart, but each section tied to the one before. The main character, Ray Carney, runs a furniture store on 125th Street in Harlem. He has a family that is growing, an apartment that is too small, and people who always sell him used TVs and jewelry and other property that might not have belonged to them very long before entering the store. This gives Carney a reputation as someone who will move stolen goods, even though he pretends to be on the straight and narrow. In the first section, Carney’s cousin is part of a heist and comes to him to help them move some of the jewels they steal. This job does not happen without hiccups to their plans,  and before he knows it, Carney is much more involved than he ever wanted to be.

The second and third sections are not related to the first section, but they continue the life of Carney and his business, which becomes more and more lucrative but shady with the passing years. Carney becomes well known as someone who moves stolen merchandise. This means he gets more business, can expand his furniture store, get rid of all of the used furniture and only sell new, while paying off the police and buying a new apartment for his expanding family. He becomes a successful businessman, but in the second and third sections, there is proof that he is only one step away from crime and the criminal element.

Many of the most famous triptychs in art have a religious theme. In Harlem Shuffle, Whitehead writes about Harlem in a way that almost feels religious, like he has chosen holy ground for the setting of his novel. He writes about the way the neighborhood  changes in the years between the three sections, but even with the changes, reverence still exists. Whitehead shows us that the spirit of Harlem will always be the same, with some honest people doing honest work, but many people doing whatever they can to get by.

In each section, not only does he revisit different buildings, streets, and businesses and how they have changed, but he also does the same with neighborhood characters. We are updated with many different stages in people’s lives. The strongest example of this is the character Pepper. Pepper is someone who Carney calls whenever he has some work that needs done that might be slightly against the law. Pepper is loyal, reliable, and always willing to help Carney, usually paid in pieces of new furniture.  He feels like more of a staple to the neighborhood than a side character, someone that is Harlem, someone that knows everything about the neighborhood. Pepper feels like the evangelist, always telling Carney the News, whether Good or Bad. Harlem Shuffle does not have any religious overtones, but it does feel like the Harlem in Harlem Shuffle, with all of it’s faults, deserves our respect and reverence.

Harlem Shuffle is literary pulp fiction. There is not a great amount of mystery, but the tension is high, the characters are all crooked, and even though Carney is a great character, he also brokers stolen merchandise, pays off cops and gang leaders, and keeps it all  from his family. Colson Whitehead still writes in his literary but very readable style. Since the book is broken into three sections, it is very easy to get swept into the story and read the entire section in one sitting. Colson Whitehead is a true American Master, and his novels deserve all of the praise they receive. Harlem Shuffle is just another achievement in an already award-winning career. But if you don’t like this book, try his next. It will be completely different.

I received this as an ARC from the publisher and NetGalley in exchange for an honest review.