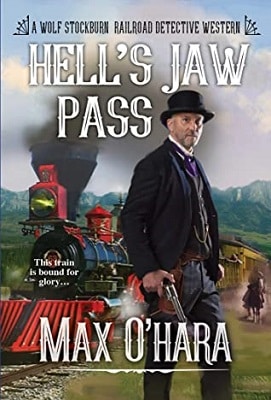 Hell’s Jaw Pass by Max O’Hara is suspenseful and full of action. It weaves aspects of action and adventure with a crime thriller inside a western and is the second book in the Wolf Stockburn, Railroad Detective series. This novel is set in Wyoming in the 1800’s.

Wolf Stockburn is a Wells Fargo detective who generally fights crime that happens on the Northern Pacific Railroad, but he isn’t just any detective. He’s known as the Grey Wolf and is respected and feared, depending on which side of the law one is on. He is extraordinary in that he started as a Pony Express rider in Native American territory and learned how to shoot from a gunfighter. He also seems to have a sixth sense when trouble is near. In this case a crew building a railroad spur is murdered with no survivors. So Wolf is sent to investigate and find the killers.

Wolf is a well-formed character and doesn’t tolerate criminals; especially those that kill in cold blood. Just his name can send some men running and others reaching for their guns. His sense of humor is not always appreciated by others, but it’s there for the reader to see and enjoy. His resolve, focus, and deadly aim are clearly showcased in this novel.

The action starts out strong. Then suspense is built during the initial investigation part of the story line, but it was so full of energy that it kept me turning to pages to find out what was going to happen next. I was fully invested in Wolf’s process of examining the crime scene and his scrutiny of the various people involved. Why would someone want to stop the spur and prevent the hauling of gold from the Hell’s Jaw Pass mine?

The author brought a strong sense of time and place to the events in the book. I could easily visualize the train, the town, the people, and the landscape. The action somehow managed to seem plausible for the times even though it was definitely extreme. Bullets fly fast and furious. But with a town full of corruption, intimidation, killers, bullies, and miners, will Wolf manage to stay alive without backup? Themes include train robberies, ranch wars, murder, trust, self-recrimination, corruption, the treatment of women, and much more.

Overall, this book was an action-filled crime thriller in a western setting with some family drama added that didn’t detract from the story, but added depth. I highly recommend this novel to those that like westerns or historical fiction crime thrillers.

Kensington Books – Pinnacle and Max O’Hara provided a complimentary digital ARC of this novel via NetGalley. This is my honest review. Opinions are mine alone and are not biased in any way. Publication date is currently set for July 27, 2021.