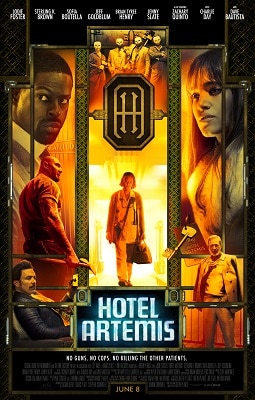 Set in the near future, with cool visuals reminiscent pf Netflix’s Altered Carbon series, this is an interesting one, with a promising plot of a hotel / hospital where criminals go to get patched up after injury. But what starts out interesting and captivating, quickly devolves into the mundane. Additionally, the major plot points are rehash and derivative: the power-hungry son who aspires to be his father, the separated lovers who save each other, and the leads overcoming their issues which have been holding them back for all these years.

To all those out in the world writing a screenplay: you don’t have to copy everything that has been done before to be successful. The audience would rather something original, even with dodgy execution, than a carbon copy.

But of course, all films have a saving grace. In this case, grace arrives in the form of Jodie Foster, who gives the performance of her life. At no point was I expecting the portrayal that we received here. From the moment we meet her character with her old handheld music player and big headphones, you can feel a sense of loss emanating from her, along with the determination to run a place that has more criminals coming through daily than your local prison.

As the film continues and storylines reveal themselves, we see a noticeable change in the face of Foster, and her acting readily follows suit. With all the action and futuristic scenes, it was great to have an anchor to the present, and I don’t think Pearce was ready for the outstanding grounding performance the film receives from Foster. She is the only reason to watch Hotel Artemis.