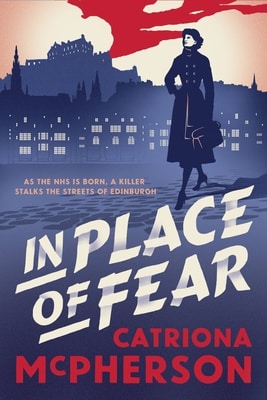 In Place of Fear

Historical fiction featuring the early days of the National Health Service in Scotland. This book takes place in 1948 and features a newly minted Medical Almoner who functions much as a medical social worker might today.

Helen Crowther makes house calls, tries to convince people to sign up for the service, and is assigned to work for two doctors in the new Health Services program. All the while she is dealing with her own personal issues of having left her parent’s home to live in a house the doctor’s offered, triggering resentment and criticism that she is putting on “airs”. She is also coping with her new husband, who was a Prisoner of War and is now home; but shows no interest in consummating the marriage. Add to all this personal angst the body of a young girl she discovers in the shed behind their new home, and life is complicated for Helen.

If you are interested in an in-depth look, although fictionalized, in how the National Health Service functioned in its infancy, this is a good place to start. The book follows Helen along on her rounds as she contacts possible new patients and deals with issues ranging from unsanitary housekeeping and childcare, to a barren couple who might consider adopting a child. These activities take place as she settles in working with two doctors, learning how to manage their personalities and finding her place in the office.

While dealing with these issues in her professional life, she also must manage her relationship with her family and their criticism of her chosen profession as well as her husband’s decision to sweep streets rather than take a higher paying job. Overlaying all of this is the fact Helen is not yet pregnant, which her parents consider her primary duty.

As Helen battles through the resistance of family and others to pursue her goal, she finds ways to encourage herself toward her goals. She begins making plans for the small patch of green behind her new little house and goes to inspect the shed in the back. It comes as quite a surprise when she finds a dead body, a young woman, in the shed. She hurries to report to the police and she notifies one of the doctors for whom she works and he offers to pronounce. Relieved, she and the doctor follow the ambulance to the morgue where things get very confusing. The dead girl, at first thought to be a girl known to Helen, is identified as someone else. Then, the body is reported to have been sent to another city, which later Helen learns is not true.

Helen becomes determined to find the body and ensure a proper notification, As she begins her search, she uncovers an entire web of salacious activities that have been pursued by some of the more respected men of the community. She determines that one of the doctors for whom she works is also involved in this, and takes on the responsibility of making sure the girl is properly identified and the activities of the entire group of men are shut down.

The mystery focuses on who is involved in the secret activities which have led to death and other negative results for some of the young women and girls in town. While this mystery is an integral part of the book, it is not the main focus of the book and readers who are interested in the other aspects such as Helen’s life, the NHS, etc. will enjoy the book more than those looking for a traditional mystery. One caution, the dialogue is all written in Scottish dialect which may make it a slow read for some. I personally found this aspect to slow my reading and make it difficult to get started in the book at first.

My thanks to Hodder & Stoughton Publishers for an advance copy of this book to review. The opinions expressed here are entirely my own.

In Place of Fear available at:
Amazon