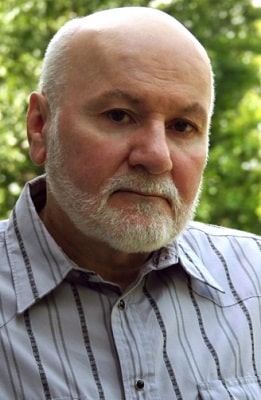 Loren D. Estleman is the author of more than 85 novels, including rime novels featuring the investigator Amos Walker, and several novels and stories featuring Sherlock Holmes. He’s also a four-time winner of the Shamus Award.

Q. You’ve won four Shamus awards spanning from the 1980s to the 2000s (not to mention the lifetime achievement award from Private Eye Writers of America and the Barry Award). How do you keep from letting accolades affect your writing?

Loren: Raymond Chandler once said it’s dangerous to watch oneself work; in other words, to alter your writing to match outside evaluations. My philosophy has always been to live inside a bubble, determinedly unaware of what’s being said or written about me. This is where conducting my life non-digitally comes in handy. I don’t go online, have never been; and now that publishers no longer provide regular clipping services, I’m almost completely unaware of what the reviewers are saying. I write to please myself, and it’s always pleasant to hear through the grapevine that there are readers who share my tastes.

Q. In The Eagle and the Viper you delve into the world of alternative history in a what-if involving an attempted assassination of Napoleon. How is this a diversion from your typical writing?

Loren: I’ve dabbled in what-if before. In Ragtime Cowboys, I postulated what would happen if Charley Siringo, the famed “stock detective” who took part in the manhunt for Billy the Kid, and Dashiell Hammett, the author of The Maltese Falcon, worked together on an investigation in 1920s San Francisco. They were both former Pinkertons, and began their writing careers in California, so what I wrote about could possibly have happened. Since there were thirty attempted assassinations on Napoleon, it didn’t stretch the point to add a thirty-first, after beginning with the actual events of the Christmas Eve Plot of 1800, which were harrowing. The parable of the lone assassin is potent in literature; again, there’s no reason to think he couldn’t have existed. The research was easy, as I’ve been reading about Napoleon since junior high school, and the writing was pure fun. I finally got the chance to use all the material I’d ingested, to turn a passion into a project, and for several months to live in early 19th century France and England.

Q. Is it true that you write your mysteries on a 1950s manual typewriter? And if so, why not a computer?

Loren: Publishers forced me to a word processor when they laid off all their typesetters. However, I still begin every project on a manual typewriter, alternating between a splendid 1960 Olympia and a workhorse of a 1923 Underwood. (My collection includes 50 machines, going back to 1896.) I feel a partnership with these mechanical marvels—really, the closest thing to a perpetual motion machine—that I never will with a computer; and with modern technology out of the loop I’m entirely self-sufficient; no tech support needed, just a supply of paper, a steady source of ribbons, and a wastebasket. Also, typewriters make a cool chug-chug sound I associate with production.

Q. Famously, you were a fan of the TV Westerns Maverick and Gunsmoke as a child. Did you have any similar affinity for early mysteries or thrillers?

Loren: The Darren McGavin Mike Hammer was always a treat whenever I stumbled upon it in syndication, and I was a fixture in front of Peter Gunn, Perry Mason, and The Fugitive; that last one in particular gets better with each viewing. The Untouchables was a guilty pleasure; it came on after our bedtime, so my brother and I would sneak downstairs to watch it over our parents’ shoulders. Then my mother rearranged the sofa, bringing us inside her peripheral vision, and we were busted. I must say I do miss that forbidden quality.

Loren: I recently delivered a new Amos Walker, Cut-Throat Dogs, to Forge, and have been using the downtime connected with our current crisis to play around with some dream projects I’ve had lying around for years. I always indulge myself between deadlines.