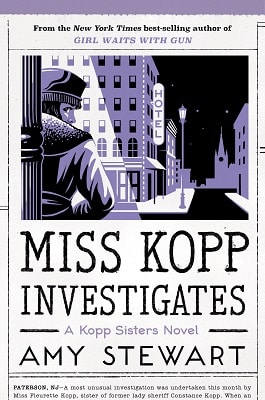 In the winter of 1919, with the war in Europe over, the Kopp sisters are finally back together again. However, it is the death of their brother Francis from a sudden heart attack that has summoned Norma reluctantly back from France and brought Constance home from Washington, where she was to work for the Bureau of Investigation training female agents. The three sisters rally around their sister-in-law Bessie and her children and try to work out how on earth they are going to manage to support themselves and the children without Francis.

Not only do any of them currently have a job, but Francis has also surprising left behind large debts and, unknown to Bessie, borrowed against the house. Norma immediately decides they need to sell the farm left to them by their parents and all move in with Bessie until they have the funds to buy a house in Hawthorne near Bessie. In her usual pragmatic way, Norma sets about fixing up the house and subdividing the land for sale as building sites. Constance finds a part-time job as a store detective which brings in a little money, but it’s their sister Fleurette who finds a lucrative job. Having lost her singing voice after an illness, Fleurette and her Amazonian parrot Laura are unable to return to their stage act. However, Fleurette is always resourceful and finds unusual employment posing as ‘the other woman’ in photographs for a somewhat unscrupulous lawyer. Needless to say, with her love of dressing up and her acting skills it’s a job she performs splendidly, but one she knows her sisters must never find out about.

As with the earlier books in this series, Amy Stewart brings us a wonderful sense of the place and the time in which the sisters live. Particularly what it was like for unmarried women and widows having to have to support themselves in a time when it was difficult for woman to work or be financially independent. Fortunately, the Kopp women are made of sterner stuff and Bessie is in good hands. It is Fleurette, the youngest of the three sisters who really shines in this episode as she stands up to Norma bossing her around and asserts her independence. Her work with the lawyer inadvertently draws her into uncovering a scam taking place against vulnerable women and for once it’s Fleurette, and not her more famous sister Constance, who is the amateur detective investigating a crime.

I love that Amy Stewart has blended historical facts with fiction in this series of books based on the lives of the real Kopp sisters. In her afternotes she mentions that Francis did die of a heart attack (although a few years later) and the sisters did sell the farm and move to a house near Bessie. Constance did work in a department store for a time and Fleurette did indeed have an Amazonian parrot and lose her singing voice, later acting as ‘the other woman’ for photos needed by men who wanted to make divorce easy for their wives. It’s this successful blending of facts about these interesting sisters with fiction that makes these books so delightful and such a joy to read.

With thanks to Mariner Books and Netgalley for a copy to read. Expected publication September 7, 2021.