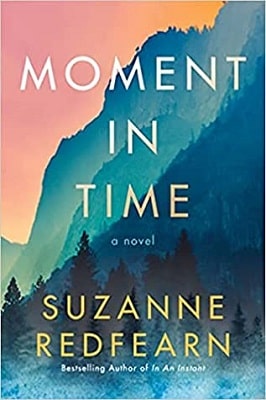 Moment in Time is the sequel to Redfearn’s bestseller In an Instant. While I did not read the former book, this book definitely stands on its own. A powerful book; it will bring out all the emotions including sad, angry, confused and sympathetic. Date rape and the drug BHT are central to this story but handled delicately and with compassion.

This novel is about three friends living in San Francisco. When one of their friends, Hazel, is drugged and raped at a local bar, Chloe and Mo rally around her. But Hazel blames Mo, who left her at the bar to take a phone call. She leaves a cryptic poem, along with the ingredients for the date rape drug, gamma-hydroxybutyrate, or GHB. Believing Hazel is going to commit suicide, they follow her on the app, “find my friend,” through California and Oregon. Chloe and Mo have their own adventures along the way, with Ruby the rescue dog and bringing in characters from other Suzanne Redfearn books such as Hunter and Kyle. They soon learn the perpetrator accused of raping Hazel has been drugged and beaten, and their road trip to save Hazel turns into an “on-the-run” from the cops in San Francisco, who believe Mo is the one who drugged the rapist.

While enjoyable, I found the author had a penchant for going in all directions at once. For example, they visit a famous restaurant in Spokane, Wa. while on Hazel’s tail. Chloe ends up fishing with the owner and a former classmate she barely remembers. But it didn’t seem to bring the story any farther and as the reader, I wondered why they would stop and have a meal and spend the night when they were trying to catch up to their suicidal friend. Mo’s character is very contradictory. Her guilt in leaving the bar, resulting in Hazel getting raped, has her considering significant jail time before giving up Hazel’s identity. She also runs a small successful news organization, but is almost child-like in her actions on social media, making compulsive mistakes you wouldn’t think her described character would make. Mistakes that get her deeper into trouble. Both Chloe and Mo make knee-jerk decisions you would not think they would make in their 20s. While the aim of their journey is to save their friend, they take endless pit stops and even find romance while the victim is wandering aimlessly across the western states.

Despite some issues I have with the characters, this novel was a thrill ride through and through. Their loyalty to their friend is both thought-provoking and touching. While the heavy subject matter is thought-provoking, I found Moment in Time to be more about loyalty to the people you love and the family you make. The Author’s note at the end of the book is also a must read, as she explains how the idea of this book came about.

Moment in Time is available at:
Amazon