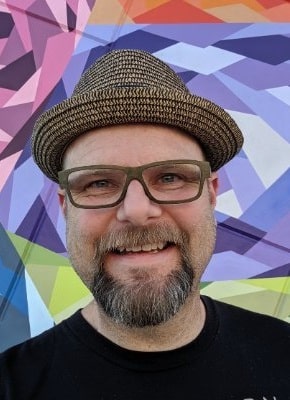 Alan Gratz is the New York Times bestselling author of seventeen novels for young readers, including Refugee, Prisoner B-3087, Projekt 1065, and Ban This Book. He’s the winner of 14 state awards, as well as the Sydney Taylor Book Award, the National Jewish Book Award, the Cybils Middle Grade Fiction Award, a Charlotte Huck Award Honor, and a Malka Penn Award for Human Rights Honor. Refugee was also a Global Read Aloud Book for 2018.

Q. When writing thrillers for kids, how do you approach subject matter in terms of what’s the right level of excitement and what’s over the top?

Alan: What do you mean “over the top?” Nothing’s over the top! I kid. Yes, I do try to be realistic. But I also want to tell a thrilling story that keeps my young readers reading. It’s no different from writing books for adult readers, to be honest. I’ve read adult thrillers that go absolutely wild places in their attempts to surprise their readers. There’s always a point where you say, “Okay, I believed everything up until now, but that’s TOO FAR.” The point is largely the same with kids. They’re savvy readers. They know when something is downright impossible or unbelievable. They might still enjoy a story like that, but the gatekeepers–the parents and librarians and teachers who put my books in their hands—THEY will see stories like that as too silly, and not encourage kids to read them the same way they would a more believable story. So I do have to walk a bit of a line. But it’s the same one I’d be walking as a writer for adults. The greatest thing about writing for kids is that they haven’t seen and read everything yet. So I can put a climactic scene on top of a cable car in the Swiss Alps, for example, as I did in Projekt 1065, and they aren’t sitting there thinking, “Oh, I saw this before in Where Eagles Dare!”

Q. Your 2017 novel, Refugee, has spent more than two years on the New York Times bestseller list. What do you think resonated so strongly with that one?

Alan: Refugee has taken on a life of its own. It’s still on the NYT bestseller list, even during the pandemic. I couldn’t be more humbled and honored by that. I wrote Refugee to help young readers see and understand the plight of refugees around the world, past and present, and its presence on the list continues to affirm that I’m accomplishing that goal. I think a big reason that Refugee works is that, like the best historical fiction, it gives faces and names to statistics. I can talk numbers at you all day when it comes to the refugee crisis in the world, but until you see it play out for one child, for one particular family, it’s harder to empathize. Refugee allows young readers to put themselves in the shoes of the three main characters and imagine, “What would I do if I was them?” The life of a refugee is so far from so many American kids’ experience—thank goodness—that it’s hard for them to picture it unless they have characters they care for and root for. So I tried to show them that refugees don’t have one face, or one name, one religion or skin color or country of origin. They’re anyone driven from their homes by violence and in need of a safe place to live. And honestly, those families could be any of us, given the right situation. I think that’s what young readers understand when they read Refugee, and why they’ve responded so passionately.

Q. What do you read? Anything in the YA/Adult thriller genres you’ve enjoyed?

Alan: I’m an omnivore when it comes to reading, but thrillers and mysteries are by far my favorite reads. On the adult side, I’m a big fan of Rex Stout, Ellis Peters, Colin Cotterill, Alan Bradley, Robert Parker, Gregory McDonald, and John LeCarre, to name a few. On the kidlit mystery and thriller side, you can’t go wrong with April Henry, E. Lockhart, Maureen Johnson, Lamar Giles, Ally Carter, Jennifer Lynn Barnes, Cherie Priest, Wendelin Van Draanen, and of course the classic, Caroline B. Cooney.

Q. Your novels of World War II, especially, have dealt with some important issues. Across all your work, what do you think have been the most meaningful messages you’ve relayed to children?

Alan: I’ve been thinking a lot about this lately, and I think if I had one overriding message, it’s that we’re stronger together. When we allow our differences to divide us, we’re weaker. When we embrace those differences, and value them, we can do incredible things together.

Alan: My new middle grade novel Ground Zero debuts on February 2, 2021. It’s a story of 9/11, told between two alternating viewpoints. The first is Brandon, a nine-year-old boy who is in the North Tower of the World Trade Center on September 11, 2001 when the first plane hits, and has to fight to survive. The second story is about Reshmina, an eleven-year-old girl in Afghanistan who fights to survive when her village becomes a battleground between the US Army and the Taliban on September 11, 2019.

After that, I’m working on a Captain America graphic novel about Cap fighting the Nazis in World War II (of course!), and a prose novel tackling climate change!