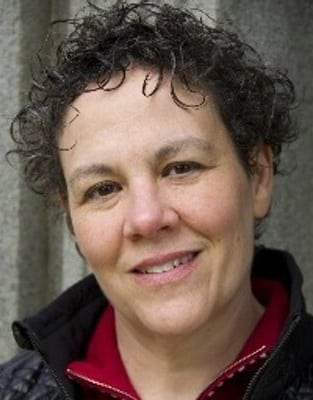 The New York Times bestselling author of thrillers and mysteries for adults, teens, and young adults, April Henry’s books have been translated into at least 10 languages. She’s been shortlisted for numerous awards, including the Edgar Award, Agatha Award, and Anthony Award.

Q. Playing with Fire is coming in January. For those of us who haven’t read an advance copy yet, what are we in for?

April: You are in for a thrill ride! Seriously. I think this is the most action-packed book I have ever written. It starts when a fire cuts off a popular trail in the Oregon forest. A small group trapped by the flames must find another way out – or die. The main character is Natalia, a girl who overcame a traumatic past and now always plays it safe. With no cell service, few supplies, and no clear way out of the burning forest, the group of strangers has to become allies to survive. Hiking in the dark, they must deal with injuries, wild animals and even a criminal on the lam – all with the fire nipping at their heels.

When the Eagle Creek fire happened in 2017, I was riveted by the accounts of the hikers who ended up trapped at Punch Bowl Falls and had to hike out together. As you probably know, Punch Bowl Falls is less than two miles from a parking lot, so many people were just wearing shorts, T-shirts and Tevas. Very few were prepared for a hike on technically challenging trails – in the dark. Miraculously they all survived the arduous journey, although I believe one woman with asthma was airlifted at the end.

I often write books with serial killers, but here the would-be killer is nature. I wanted a character would be pushed to her limits, so for Natalia being trapped by the fire means revisiting her nightmarish past. But she also has first aid training, so almost against her will, she becomes a leader. To write the book, I became certified in Wilderness Medicine. Everyone in that class was way more hard core than me. They all free rock climbed, sea kayaked or took groups of troubled teens into the woods for weeks at a time. When it was my turn to explain why I was there, I just said, “I write books.”

Q. You write thrillers for teens and young adults (not to mention adults who love those kinds of thrillers!) What are some of the challenges in writing for each audience?

April: Adults who are fans and adults who are bored by you act exactly the same: politely. Teens don’t have much of a filter. Their emotions are out in the open. If they like your books, you’re the best author in the world. (You might also be one of the few authors they’ve read.) And if they are bored by you, they don’t hide it. In non-pandemic times I do a lot of school visits, so I’ve learned the challenges of keeping a gym full of 800 middle schoolers interested.

I haven’t written an adult book for a few years now, although I think I will go back eventually. And as you said, lots of adults do read YA books. For one thing, some of the best writing is being done for that age group. And for those of us who remember what a thrill it was to fly through pages, to finish a book in a few days, a YA book, which is often shorter, can bring back that same feeling.

My goal is to make people love reading, and judging by the letters I get, I’m succeeding. I’m especially proud of the ones from students who have changed their minds about reading after reading one or more of my books.

When I first learned my books appealed to what schools call “reluctant readers,” I decided to write specifically for them. I started writing shorter chapters that ended on cliffhangers, and books filled with plenty of twists. It turned out that everyone likes those things. They even made my books for adults better.

I don’t dumb down my vocabulary when I write for teens. However, I’ll just write “He swore,” rather than saying exactly what it was the character said. Some of the bluest swearing I’ve heard has been in front of middle schools, but some students will think he said “damn” and some will think of the f-word. The same goes for violence. Even writing for adults, I’ve never been a big believer in explicitly spelling out a violent scene. I’ll sketch it in lightly, and let the reader fill in the blanks. That way is actually scarier. The monster in the closet is more frightening than the one you can see.

Q. What authors in and out of your genre do you love to read?
April: Peter Heller, especially The Dog Stars. Karen McManus, especially One of Us Is Lying. Kate Atkinson, although my favorite of hers is Life After Life, which is not one of her detective novels. Adrian McKinty’s The Chain had such a great hook. After reading Tommy Orange’s There, There I can’t wait to read more of his work.

The problem with writing mysteries and thrillers and then reading one is that you are constantly fact-checking in your head—and so many authors do not do their research, and the editors don’t know enough to correct them. I try really hard to get details right, to the point it’s probably counterproductive. Like this week I was trying to figure out if comments on a 2002 newspaper article would be available in the Wayback Machine – and the paper is fictional!

Q. Let’s talk Oregon. Have there been any advantages or disadvantages to pursuing a publishing career so far from New York?

April: Nothing’s really that far away, thanks to phones and computers. I do try to get to New York once a year or so to touch base with people and make myself real for them. And when there’s not a pandemic, I frequently see my editor at conferences for librarians and teachers.

Q. It’s been about ten years since your first huge commercial success, Girl, Stolen hit the shelves. What have you learned in the intervening time?

April: I got my first contract in 1997.I’ve learned you can never tell what book is going to hit it big. Sometimes a book you thought was a sure-fire hit is met with little fanfare. But Girl, Stolen has sold a half-million copies. I’ve learned I can write faster than I ever thought possible. I’ve learned the that more research I do, the better.

Q. What are you working on now?
April: You Have Reached the End, about a girl in Southern Oregon who starts a podcast covering the cold case of a teen who was murdered 18 years ago. Of course she will learn that the use isn’t as cold as she thought. For that, I’ve been learning how to podcast, and I might try to put out the first episode. Playing around with making a logo and recording the first episode has offered a nice respite from our current reality.

The romantic mystery author on The Secrets of Emberwild and more

END_OF_DOCUMENT_TOKEN_TO_BE_REPLACED

The bestselling police procedural author on VANISHING HOUR and more

END_OF_DOCUMENT_TOKEN_TO_BE_REPLACED

The thriller novelist on THE BREAK and more