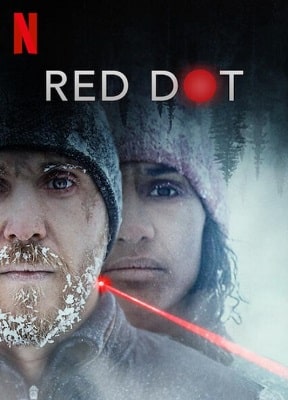 Red Dot is a Swedish 2021 psychological thriller film, that gives the viewer characters who are constantly changing in our eyes (due to the story adjustments based on film timeline), a narrative and villains that feel alive, and beautiful cinematography of snowcapped mountains and frozen lakes. (It really feels like all snowy regions are all the rage at the moment due, perhaps, to the pandemic).

Red Dot follows an engaged couple who, when on a romantic trip together, find a red dot (as if from a laser) illuminating their tent. The dot traces and follows them as they begin fighting for their lives. And as the do so, their past comes more clearly into view, and the sadistic hunt becomes one they may not survive.

The story comes to us in fits and starts, thanks to the use of the past to fill in what is happening to the characters. Viewers who aren’t paying attention to every line spoken by the characters and the reactions of those they are speaking with will miss out on some crucial details.

In Red Dot are given a typical couple, who after getting engaged come to realize that life together may not be everything that dreamed it would be. They go on a trip together in an effort to rekindle the magic. Together with their beautiful dog, Boris, they vacation to a mountain top that allows them to sleep under the Northern Lights. It’s here that the mysterious red dot appears.

The backstory provides us with a list of potential people who could be behind the red dot, and their reasoning for hunting down the couple, but the film is hindered through the over-use of flashbacks. If some of the story had been told through an accelerated version in the opening ten minutes, we could have been well placed for just a couple of flashbacks for the entirety of the film. As the story comes full circle, the group that you agree with, is going to end up showing your morality and what you may do in a similar circumstance. While you may feel that you know what is happening during the film and that you can guess what the outcome is going to be, you need to be prepared to be surprised. Not everything is as it seems in this movie, and if you blink or zone out, you may miss what is right in front of you the entire time.