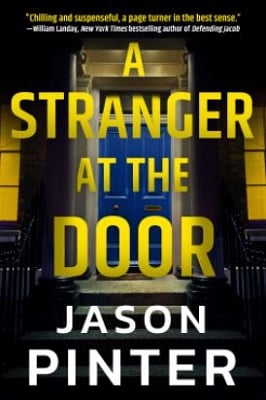 A Stranger at the Door

Jason Pinter dazzles with a protagonist whose past is anything but clear in this electrifying sequel to his newest series. In A Stranger at the Door, Pinter creates a murder mystery that has deeper and more complicated plots, as Rachel Marin must again face her past and the risks she’s taken to protect her children, one of whom finds a new form of trouble. With a mixed civilian-police procedural story, Pinter slowly and deliberately weaves a web and traps the reader into forging ahead, guessing who is behind it all. Recommended for those who loved the first novel in the series, as well as the reader who might like something a little different in a crime thriller.

Rachel Marin may not be her real name, but it is what folks in Ashby, Illinois call her. When Rachel receives an email from her son’s teacher, asking to meet and discuss a private matter, she’s intrigued. However, before she can make it to see Matthew Linklater, he’s been murdered and his house set ablaze. Who could want to do this to a man that many describe as quiet and salt of the earth?

Rachel is still as keen as ever to thrust herself into the middle of a criminal investigation, something that her boyfriend, Detective John Serrano, has come to realise he cannot deter. As they work the case, it soon becomes apparent that one of the students at school may have had a beef with Linklater, but no motive is yet clear.

Things take a definite turn for the worse when Rachel’s son, Eric, sneaks out to the local ball field in the middle of the night. With a little help from Detective Serrano, they discover that it is a collective of teenage boys who are being targeted to begin selling a wide range of products. It would seem they prey on the vulnerable, creating a safe space for them. While not illegal, Rachel wants Eric out of this group and can only see trouble lurking. Everything seems to be led by one Bennett Brice, who uses foot soldiers and some violence to keep the boys in line.

As Rachel tries to head up the investigation, she is neutered repeatedly by Serrano, which does not sit well with her. Attempts to get Brice to stay away from her son also fail miserably, when Rachel is attacked one day as she follows Eric discretely and lands in the hospital. However, Brice could be the key to the Matthew Linklater murder, though the pieces are still not fitting together.

Things get even more complicated when someone from Rachel’s past arrives in town. Evie Boggs has a secret that Rachel cannot allow to come out, but must play her cards right or things could get even worse for Eric. With a killer on the loose and more victims emerging, Serrano will have to utilise the mental acuity of his girlfriend and the grounded nature of his own partner to solve the case, or a number of teenage boys could end up in the morgue themselves.

I only recently discovered the work of Jason Pinter and am kicking myself for waiting so long. I devoured the series debut and was highly impressed with the writing and presentation, which led me to rush out and get my hands on this novel. Mixing a police procedural with civilian criminal investigator keeps the reader busy as they try to piece it all together in a format that is not entirely orthodox.

Rachel Marin recaptures her role as protagonist, offering more pieces of her life throughout the story, though her reveal at the end of the last novel sets the table for much of the vague backstory. Marin is sharp and on point when it comes to the investigation, but still has trouble when it comes to ceding control of the situation to the professionals, including her boyfriend, Detective John Serrano. Rachel loves her two children, who could not be more opposite to one another, taking risks to keep them safe. This familial dedication does, at times, blind her and pushes Marin into making poor choices.

Pinter crafts a stellar supporting cast of characters as well, providing fodder for the numerous plot lines.  While the criminal element drives the story, there are personal struggles as well, which are effectively shaped by those Pinter uses to hash out the details. There is never a lull in the story telling, which drives many of the characters to grow in their own way and provides the narrative with something worth exploring. With a handful of returning faces, the reader can learn a little more about them, but the new cast takes the story in some interesting directions.

The story definitely proved unique for me in the thriller genre. The melding of an active police investigation with an overly keen civilian investigator keeps the story moving and allows the reader to feast on a few perspectives simultaneously. Pinter pulls the reader in with a strong narrative that never stops evolving. The narrative works well with the clipped dialogue, offering a sense of realism and great banter. Chapters are predominantly short, which keeps the reader on their toes, never knowing what’s to come. With a personal thread that takes Rachel Marin out of her usual ‘distanced observer’ role, the reader is treated to some wonderful magic throughout this piece. While some have said this works well as a standalone, I question why anyone would want to do that. There is so much to enjoy in both books together that the reader would be foolish not to start fresh and enjoy the ride!

Kudos, Mr. Pinter, for a great series that kept me guessing. I am definitely going to keep my eye on your future publications and may look back to see what other gems you may have written.

END_OF_DOCUMENT_TOKEN_TO_BE_REPLACED

An archivist is found dead of an apparent drowning