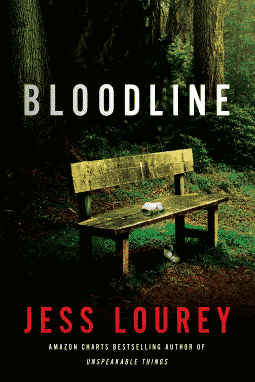 Bloodline by Jess Lourey is a psychological thriller that grabbed me from the beginning and didn’t let go. Her excellent writing and exquisite storyline captured my attention immediately. The author’s note tells the story that inspired this novel.

When a pregnant Joan Harken is mugged on her way home, she agrees to move to from Minneapolis to her fiancé’s small hometown two and a half hours northwest. Deck Schmidt tells her Lilydale is peaceful, friendly, and everyone knows everyone and looks out for each other. His parents have even gifted them their old house and Deck tells her he is sure the local newspaper will hire her as a journalist and she will get a coveted byline. What could possibly go wrong? Is it too good to be true? Something seems off. Is Joan being watched or is she being paranoid? Can she trust her instincts? Is there anyone she can trust?

This novel takes place in 1968 and 1969 and there is some jumping back and forth in time. As the time shifted forward, I continued to wonder what happened in the intervening months that landed her in the situation she is in in the future. While it would have helped if the transitions had been labeled with dates, a picture is gradually revealed to the reader.

Recognizing that this novel is set in the late 1960’s and not current times, I can see why Joan handled some things the way that she did. This was a time before the internet and cell phones. The story would not have worked for me if it was a contemporary setting so the author selected an appropriate timeline. Joan was someone that I wanted to be safe and happy and to have a healthy baby. But she also has some flaws that emerge during the course of the books that makes her more believable. Almost none of the other characters were likeable.

The writing is very atmospheric and creepy; the plot tense and suspenseful, with a few twists and a dramatic ending. Several themes are woven into the book, but I don’t want to give away any spoilers. Suffice it to say that family relationships and town dynamics play a large role in the story.

Overall, I thoroughly enjoyed this novel. It was an entertaining book that was emotionally intense at times. If you are a fan of psychological thrillers and family dramas, then you may want to check out this book. I am looking forward to reading more books by this author.

Opinions expressed in this review are completely my own and are not biased in any way. Publication date is currently set for January 1, 2021.

A house that holds a shocking secret

END_OF_DOCUMENT_TOKEN_TO_BE_REPLACED

We Were Never Here