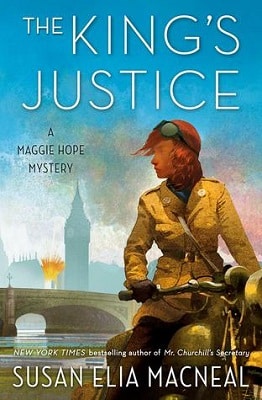 The ninth mystery in the Maggie Hope Mysteries is set in London in 1943. The Blitz is seemingly over, but the city is in ruins. After her experiences since the beginning of the War, one could say that Maggie is in ruins herself.

The things she saw and did working as a spy behind enemy lines have left Maggie disillusioned and wondering if she has taken the wrong path. She feels betrayed by her government and is taking a leave from the SOE. She still has a talent for solving murders, but the last one she helped Scotland Yard with was the Blackout Beast, Nicholas Reitter, a serial murderer who was terrorizing the city. Her up-close and personal encounter with Reitter almost cost her life. Her escape is drinking too much, smoking too much, riding a motorbike at high speed, and de-fusing unexploded bombs in the streets of London. Most of the men she works with are conscientious objectors and “Britalians”, British citizens of Italian extraction. War has changed Maggie in ways she never expected.

Her boyfriend, Detective Chief Inspector James Durgin, is worried about her and wants to involve her in a new case, the theft of a Stradivarius. Maggie is reluctant but agrees, not expecting the theft will intersect with another serial murderer operating in London, Jimmy Greenteeth. This murderer targets not women but conscientious objectors, disposing of the bodies in a particularly gruesome fashion. That makes it personal for Maggie.

I had not read this series before, so I felt somewhat at a disadvantage at the beginning. However, MacNeal brought me up to date on many of Maggie’s very complicated life events without divulging them all. Now I must start at the beginning of the series to catch up, not a chore! The story drew me in with its vivid portrayal of wartime London immediately. There is a wealth of historical detail about wartime measures of which I was unaware. Even not at her best, Maggie is an engaging character who struggles with the moral complexity of living through War and surviving.

I am looking forward to finding out more about how this American girl landed in Britain and started as Mr. Churchill’s Secretary.

The bottom line: I highly recommend The King’s Justice.

Thank you to Bantam Books for a copy of the book in exchange for an honest review.

END_OF_DOCUMENT_TOKEN_TO_BE_REPLACED

A Victorian murder mystery, with threads of spiritualism and supernatural

END_OF_DOCUMENT_TOKEN_TO_BE_REPLACED

Spies, murder, and romance in England during World War II