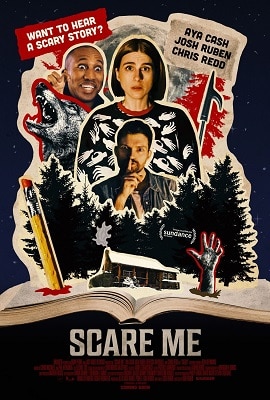 Beware: Spoilers on the ending

In Scare Me, two writers stay up all night in a Catskills cabin during a thunderstorm, telling scary stories by firelight. Unexpectedly, it proves to be an instructive, positive experience until one of them turns out to be too fragile for personal growth.

Fanny Addie (Aya Cash) is a successful horror novelist with a bestseller in the charts. Fred Banks (writer-director Josh Ruben) is an advertising copywriter with a vague sense of entitlement and zero credits.  During a power outage, the two are thrown together and neophyte writer Fred probes the famous author for anything he can use. His questions about her current project cause Fanny to assume a defensive posture.  “I never discuss my ideas. Some people steal, especially desperate white dudes like you,” she tells him. This observation takes place while she’s showing him how to build a fire in a dark cabin in the woods.

Yes, this is a horror movie of our times, and white men are called out for making things generally shittier through their mulish obstinacy. Over the course of one enchanted evening in a single location, Fanny challenges wannabe author Fred to put up, or shut up in a storytelling showdown. “Come on Fred, it’s story time,” she coaxes. “No judgies.”

To his credit, Fred soon learns that he’s out of his league, as Fanny dissects his lame attempts at a narrative about a werewolf, calling it “trodden.”

“Details!” she howls at Fred during his painfully amateurish recital, followed by a barrage of suggestions: Use your space, show me the shakes, how come the kid’s mom knows how to handle a gun so well?

Fanny schools the dilettante scribe and mocks his pedestrian oratorical skills, but she also forcefully demonstrates how to tell a better story, by telling him a better story, about a little girl and her creepy grandfather.

“School” is the operative word in Scare Me, and Professor Stephen King hovers like a ghost in the room. Fanny doesn’t care for King’s Silver Bullet (“childish, campy garbage”) but does agree with King’s assertion that reading other authors can improve one’s chops. (Also, a minor character looks and talks like Kathy Bates in Misery.)

After a shaky start, Fred gets the hang of it, and for a time, feels what it’s like to have his creative juices flow. At this point, Scare Me is running with a full head of steam, shifting mood and tone in cavalier fashion, which is not a characteristic that will endear the movie to linear thinkers.

It’s definitely a dark comedy, but it’s hard to tell where we’re headed.

Fred and Fanny share definite chemistry, bonding over their mutual love of horror, specifically the painful puns dispensed by TV’s Cryptkeeper. They duel, dance, and embellish each other’s tales, while Ruben, from the director’s chair, employs a deep bag of inventive camera moves to create space—and honest-to-goodness frights—on a small set. No blood, no carnage, no kidding.

There are vivid moments when the lighting, dancing shadow play, and perspective shifts are reminiscent of Jonathan Demme’s moving ingenuity with Spaulding Gray’s stories in Swimming To Cambodia.   Sadly, the creative honeymoon comes to an end, and Fred, instead of being grateful for getting a crash course in how to tell a decent story, decides his feelings are hurt, and that his own efforts will never be any good. So he devises a cheesy, horror movie finale, because he’s jealous and can’t think of anything more original.

The finale devolves into stalker boilerplate, and Fanny wants nothing to do with it, calling Fred out for a “bullshit” ending.

Scare Me has a lot of things going on, not all of them are successfully realized. The ending, though it makes sense, still fizzles. And there’s definitely some fat that could have been trimmed along the way. Even so, there is much to admire. It’s both entertainingly told and long on ideas, particularly the joys and terrors of storytelling.

Aya Cash is a fast-talking dynamo as Fanny, a demanding woman who just wants to hear something scary. Filmmaker Ruben portrays a no-talent schmuck in Scare Me, but in reality he’s clearly an artist on the ascent. His character Fred would be both proud and envious.