There is no doubt in my mind that Laurell K. Hamilton could write almost any genre of book, not just the supernatural romantic suspense / paranormal and urban fantasy novels that she is well known for. Sucker Punch is more of a supernatural suspense police procedural blended with a very uncomfortable romantic suspense story.

It is the twenty-seventh book in the Anita Blake, Vampire Hunter series. This time, the main setting is in the fictional town of Hanuman, Michigan. U.S. Marshal Winston Newman has asked for Anita’s help. Both are U.S. Marshals with the Preternatural Branch. Bobby Marchand, a cat-based lycanthrope, is accused of killing his uncle Ray, the only father he has ever known. While the evidence points to Bobby and a warrant of execution is already under way, something seems off about the murder.

This book focuses on the investigations of the marshalls, the state police, and the local sheriff’s department for a large part of the book. However when Anita’s long term friend, Marshall Ted Forrester and another marshall, Otto Jeffries show up, the story gets blended with several agonizing interactions between Anita and Otto.

Whether it is Anita’s relationships with the many men and women in her life, the relationships between Anita and her co-workers, or relationships between the local police and the U.S. Marshals; there is a lot of drama. This is not like most of the books in the series where there are a lot of steamy scenes. Besides the specific murder case, this novel is about how Anita is struggling personally with metaphysical changes that are affecting her ability to do her job effectively, and how she is struggling with all of the various types of relationships she has at the moment. It was interesting to see some additional character development with Otto; scary though it was.

There are a lot of themes running through this novel including anger management, various phobias, verbal abuse, racism, gender bias, lies, deception, the paranormal justice system, and much more. There is also a look at what can happen when police know both the victim and the accused.

Overall, this book was a study of paranormal police investigation and complicated relationships with suspense and occasional action intermixed.

I have read all of the books in this series up to this point and can’t wait to start the next one. They are best read in order as there is a lot of background and character development that builds over time. This novel is definitely a departure from the previous books in this series. However, the author continues to bring great characters, entertaining and unique story lines, action, suspense, and romance together in her novels.

I own a digital copy of this novel. This is my honest review. Opinions expressed in this review are completely my own and are not biased in any way. 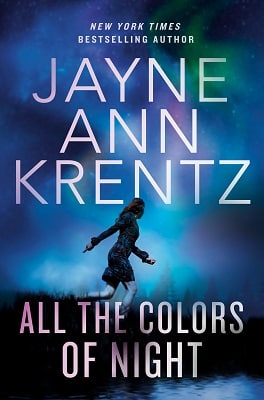 Review: All the Colors of the Night