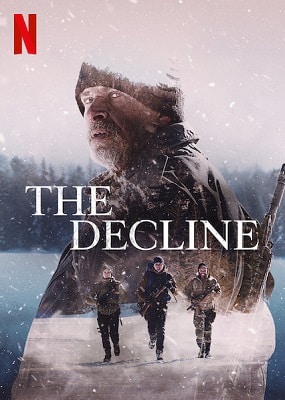 The Decline is a 2020 action thriller written and produced in Canadian French, and the directorial debut of Patrice Laliberté. It is the first Quebec film produced as a Netflix Original, with a premiere in February 2020 at Rendez-vous Québec Cinéma before the online release later in the year.

Since its Netflix release, The Decline is available in 32 languages with the original cast voicing the English version.

In this thriller, a group of people believe the world is close to ending due to something like a natural disaster, nuclear bombs, financial crashes (and more along those lines) and thus join a survivalist training exercise. But an accident results in a division amongst the group. Alain is the leader and owner of the ranch where the training is taking place, and here he operates off the grid and has become self-sufficient on the belief that society is going to collapse at any minute. Though we are introduced to the rest of the group, the film focuses on Antoine, who has been preparing his partner and young daughter to be ready to go at a moment’s notice, and is seen waking them in the middle of the night for trial runs of what they need, where they will go, and how long the journey is going to take them.

The Decline deserves recognition for its rather original storyline, visuals, and perhaps the most important thing, the length of the film. It has a runtime of around 80 minutes, which is relatively unheard of for films these days. It was perfect. The right amount of time to tell the story, and keep the progression going from scene to scene with minimal filler. With the storyline being something that we can associate with and understand, (that there are people out in the world who are survival specialists and believe everything is primed for a collapse) gave the sense of reality. And while I may not agree, the film portrayed everything in such a way that it becomes believable and understandable.

The visual side of The Decline is powerful and creates picture-perfect scenes that viewers will appreciate no matter what is happening otherwise. We’re treated to snow and a ranch that perfectly fits characters who strive to become self-sufficient. The cold is nearly a character in itself. Deep blankets of snow, and even the typical frozen lake, make appearances. But as the film plays out, we end up watching something that is akin to a slasher flic, in a sense, with the visuals of blood, gore, and the contrast of pure snow.

The Decline works due to the fast pace, interesting characters, and moral dilemmas that feel familiar, albeit on a smaller scale.